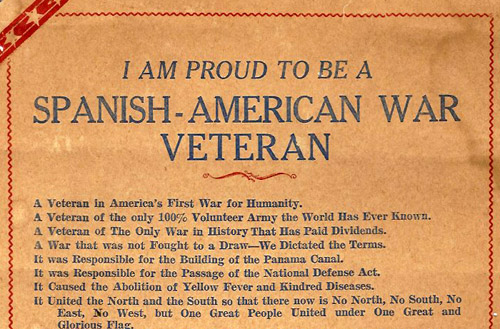 “They are too many”

It was originally called Decoration Day, a time to place flowers on the graves of the war dead.  Now, as Memorial Day, it also marks a long weekend, store sales, and the beginning of summer, and the public is often indifferent to the  solemnity of the occasion.

For James Knox Polk Lambert, its meaning was fresh.  In Paris on May 30, 1919–Decoration Day–the Kentucky native was on duty with the YMCA, ministering to soldiers awaiting repatriation after World War I.  “Delightful weather,” he observed in his diary, “and charming scenes–bright sunshine, a clear sky, soft atmosphere, rich blooming flowers, sweet singing birds and throngs of well dressed people from all parts of the world.”

But the contrast between that lovely spring day, and the past year spent touring a country shattered by war, immediately clouded his thoughts.  Wrenched back to all that he had seen during his time overseas, he continued:

It is not possible to decorate with flowers all the graves of this war’s dead.  They are too many, too widely scattered; in France, Belgium, Italy; in the Balkans, the Gallipoli peninsula, Mesopotamia; in Russia and the Far East; in unmarked graves and in the fathomless ocean, but wherever they are, sleeping in great cemeteries or still in lonely graves hard by their rendezvous with death, they are not forgotten.

James Lambert’s diary is part of the Manuscripts & Folklife Archives collections of WKU’s Department of Library Special Collections.  Click here to access a finding aid.  For other war collections, search TopSCHOLAR and KenCat.

Comments Off on “They are too many” 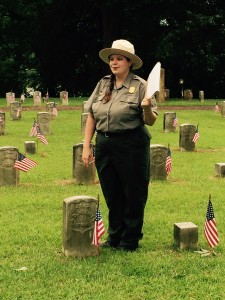 U. S. Park Ranger explains that this is the true grave of the boy honored by the song, Memorial Day 2015.

Yesterday, I had the opportunity to visit the Shiloh National Cemetery located on the Shiloh Battlefield within our national park. Our ranger took us to the grave of the young boy commemorated in a rare piece of sheet music which we hold in Library Special Collections. The title is “The Drummer Boy of Shiloh.”  She told us that immediately following the Civil War, another boy was mistakenly named as the soldier about whom the song had been written and he did not correct the general public, but instead enjoyed the publicity. The lyrics tell that the drummer boy died on the battlefield.  Later, historians researching Shiloh identified J. D. Holmes to be its true soldier hero.

WKU’s Library Special Collections has over one hundred war songs in its 4228 pieces of sheet music.  In our collection of Civil War ballads, WKU has nine titles by Will S. Hays of Louisville, Kentucky, including “The Drummer Boy of Shiloh.”  Although a Unionist who was publishing titles like “The Union forever, for me!” and “Sherman and his gallant boys in blue” through a Louisville publishing house during the Civil War, Hays wrote many lyrics between 1861 and 1865 which stirred the heart strings of Yankees and Rebels.  A good example is “I am dying, Mother, dying.”  During the two day battle of Shiloh, Tennessee, more Americans died in combat than the total of all wars to that date.  It was the first of many Civil War battles with unthinkable numbers of casualties. 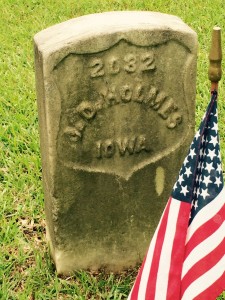 “On Shiloh’s dark and bloody ground, The dead and wounded lay;  Amongst them was a drummer boy, Who beat the drum that day.  A wounded soldier held him up His drum was by his side; He clasp’d his hands,  then rais’d his eyes, And prayed before he died.

Look down upon the battle field, ‘Oh, Thou our Heavenly Friend!  Have mercy on our sinful souls!’ The soldier’s cried ‘Amen!’ For gathered ’round a little group, Each brave man knelt and cried; They listened to the drummer boy, Who prayed before he died.

‘Oh, mother,” said the dying boy, ‘Look down from heavn on me, Receive me to thy fond embrace — Oh, take me home to thee.  I’ve loved my country as my God; To serve them both I’ve tried.’ He smiled, shook hands — death seized the boy Who prayed before he died. 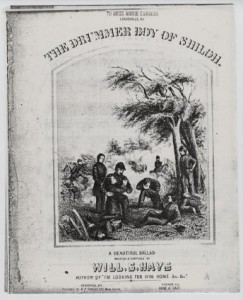 Stout hearts were they, and brave; The flag his winding — sheet — God’s Book The key unto his grave.  They wrote upon a simple board These words; ‘This is a guide To thoses who’d mourn the drummer boy Who prayed before he died.’

Ye angels ’round the Throne of Grace, Look down upon the braves, Who fought and died on Shiloh’s plain, Now slumb’ring in their graves!  How many homes made desolate — How many hearts have sighed — How many, like that drummer boy Who prayer before they died!