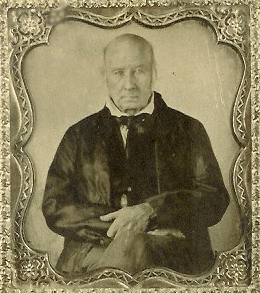 From their roots in Henry County, Virginia, the Alexander family migrated to plantations in Kentucky, Mississippi, Texas and elsewhere.  Members kept in touch, but there were two that patriarch Reuben Alexander (1785-1864) might not have wanted to seat next to each other at Thanksgiving.  One was his nephew, Edward Fontaine, of Hinds County, Mississippi.  The other was Reuben’s own son Miller, who caused his family to drop its collective jaw when he freed his slaves and struck out for Iowa to go into business.

In a letter to his father from Keokuk in 1859, Miller acknowledged the damage he had done to his net worth, but the deeply religious man felt compelled to explain himself to his skeptical parent.  “I knew I had not your approbation in moving North–And am sorry for it, but it was my duty to obey the voice of conscience and of God,” he wrote.  Moreover, “if you were possesser of ten thousand slaves and would give them to me to return to Ky. I could not do it.”  While not an activist for abolition, Miller declared that “every feeling of my nature revolts at the idea of owning a fellow creature, when I am but a worm myself.”

Only a month earlier, Reuben had received a letter from nephew Edward, who weighed in on his cousin’s struggles.  “I regret to find from Cousin Miller’s Letter that his fanatical freak, freeing his slaves, and settling among the pious Yankees had led him into difficulties.”  Nevertheless, Edward–a pastor–hoped that Miller’s youth and energy would “enable him to extricate himself from the embarrassments into which his unscriptural views of the question of Slavery have drawn him.”  Edward prayed that Miller, whose former slaves had doubtless been rendered equally unhappy by this unholy state of affairs, might recover from his “fanatical freak” and regain his former prosperity.

Comments Off on A Scriptural Divide