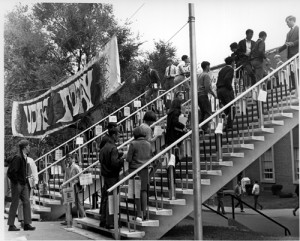 The Student Advisory Council of 1956 was the first incarnation of WKU’s Student Government Association. A constitution was written in 1963 and a student council was active in February and of March 1965.   In 1966 things finally got underway with a newly written constitution and approval of the Kelly Thompson administration.  Since then the group has been active on campus taking on the issues of the day from discrimination to tuition hikes, ice machines to visitation policies.

Comments Off on SGA Records