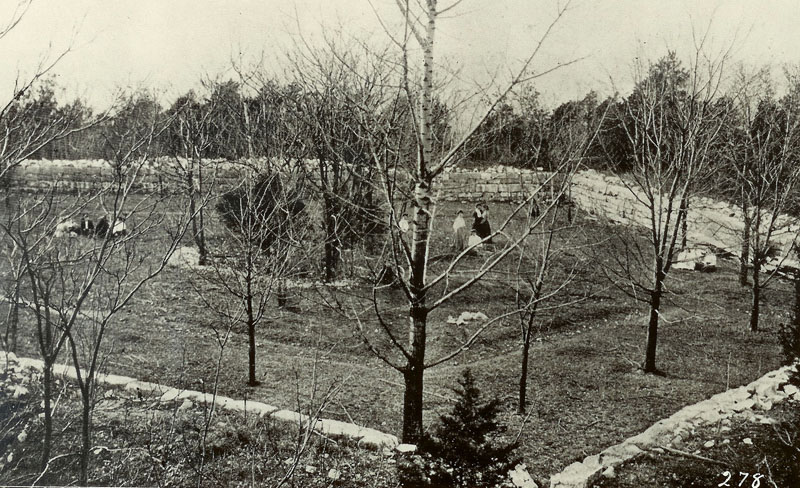 Remnants of the Civil War fort on WKU’s campus, about 1907

On September 22, 1861, William Howard wrote a letter to his family in Caldwell County.  A private in the 3rd Kentucky Infantry, Howard was with the first wave of Confederate troops who arrived in Bowling Green four days earlier from Camp Boone, Tennessee to begin a five-month occupation of the city.  “We are encamped at Bolen Green in Ky. Warren Co.,” he reported, and thanked his family for the socks he had received just prior to departing from Camp Boone.

Of Bowling Green, Howard wrote that “Union men here are as thick as dog hair”; nevertheless, he pronounced himself ready for a fight against the “Lincolnites.”  Over the next few months, he vividly depicted the trials of camp life for the ordinary soldier.  Like many of his comrades, Howard grew tired and ill as he helped to build fortifications in cold, rainy weather, and he watched as the “heep of sickness in camp” took its toll.  Early in November, he reported that deaths in his brigade were averaging about one per day, with 38 dead since their arrival.  The Yankees never showed up for battle, but in January 1862 Howard still believed that there would “be a big fight in Ky” before too long, “and then peace.”

When he wrote on September 22, Howard was apprehensive about the future, telling his family that “its extremely doubtful about us ever meeting again.”  He was right.  He died in Mississippi on February 12, 1863.

The letters of William B. Howard are part of the collections of WKU’s Special Collections Library.  Click here to download a finding aid.  For more on our extensive Civil War collections, click here or search TopScholar and KenCat.

Comments Off on 150 Years Ago Today