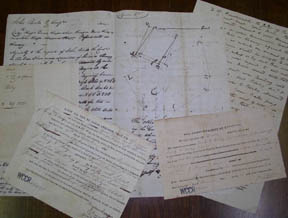 In the 19th century, equity court (sometimes called chancery court) was the forum where Kentuckians sought justice for wrongs that could not adequately be remedied in a court of law.  For example, where a court of law might simply award monetary damages for breach of contract, an equity court could order the contract performed exactly as written, or order it undone as if it had never been made.  Equity courts could order a person to act in a certain way–to give an accounting of ill-gotten profits, for example–or not to act in a certain way, such as selling property that was likely to be seized for debt, or leaving the jurisdiction in order to avoid a lawsuit.  Equity courts also handled other cases requiring the broader application of principles of justice, such as divorces, estate disputes, and problems involving title to land.  The Department of Library Special Collections holds a large collection of Warren County Equity Court cases covering the years 1802 to 1856.  A finding aid is now available online, showing the names of the plaintiff and defendant, the date, the number of documents in the file, and a summary of the type of case.  The list is arranged by case number and can be most easily searched by using the “Find” function of your word processing software.  Remember: standards of literacy varied widely, so use your imagination when searching for a name and possible alternate spellings.  The finding aid can be downloaded here.