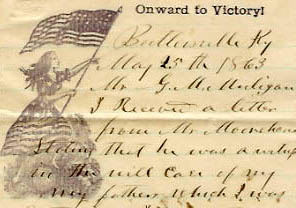 The Johns and Moore families of Trigg County and the Mulligan and Brown families of Allen County, Kentucky have left a historical record of more than 400 letters that is now available to researchers at WKU’s Special Collections Library.  The families were linked by Gilbert Marshall Mulligan (1821-1877), an attorney who practiced in Allen and Warren Counties.  In 1848, Mulligan married Mary Winston Johns and had three daughters; after his wife’s early death, Mulligan married Lucy Tate in 1857.  One of Mulligan’s daughters, also named Lucy, married attorney Eugene Scott Brown in 1872.

The correspondence of both Mulligan and his son-in-law, Eugene Scott Brown, is well represented in the collection.  In particular, Mulligan’s letters cast light on his law practice and his service as a captain in the Union Army during the Civil War.  But the women of the family are also present: Mulligan’s first wife, Mary, and her sister Julia (Johns) Moore; his daughters Mary Frances Mulligan and Lucy Mulligan Brown; and his granddaughters Winston (Winnie) and Fannie Brown.  Everyone shared news of health, finances, births and deaths, but as two young women entering adulthood at the turn of the twentieth century, Winnie and Fannie also pondered the mysteries of courtship.  Years earlier, in correspondence with schoolmates at various educational institutions in Kentucky, their grandmother Mary Johns did the same.

A finding aid for the Moore-Mulligan-Brown Collection can be downloaded here.