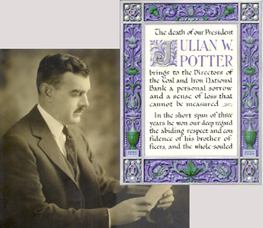 It was the Roaring Twenties, and Bowling Green native Julian Whitfield Potter was riding high.  The son of prominent banker J. Whit Potter (for whom WKU’s Potter Hall is named), Julian served an apprenticeship with his father’s businesses before becoming vice president of the American National Bank at age 27.  Following service in the Naval Flying Corps during World War I, he headed for New York City to make a name for himself in commercial banking.  In 1923, at age 33, Julian Potter was elected president of the Coal and Iron National Bank.  As bankers are inclined to do, he was soon contemplating a merger of his firm with the Fidelity International Trust Corporation, a deal that would have put him at the head of one of the world’s largest financial institutions.

But it was not to be.  On New Year’s Day, 1926, after an eight-week bout with typhoid fever, 36-year-old Julian Potter died of pneumonia.  For his business colleagues in New York, memorials took the form of beautifully inscribed manuscripts forwarded to Potter’s mother in Bowling Green.  One arrived nestled in a polished wooden box, while another was in a slipcase edged with sterling silver from Tiffany & Co.  These are now in the collections of WKU’s Special Collections Library, along with many other resources documenting the history and accomplishments of the Potter family.  For a finding aid, click here.