More from “Out of the Woodwork” 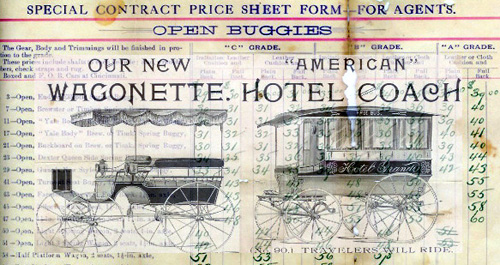 When we last left retired WKU professor Don Slocum, he had found a century-old letter wedged behind the siding of his back porch and donated it to WKU’s Special Collections Library.  Now, his old house has disclosed more of the secrets of its past owners.  In addition to two more letters dating from 1904, he has found some material relating to the American Carriage Company of Cincinnati, Ohio.

Dating from early in the 20th century, one of the leaflets promotes “Our New Wagonette,” perfect for use on pleasure trips or as a “general utility wagon for summer resorts.”  Painted black, with dark green leather cushions and a “first-class foot brake,” the carriage came with or without a canopy.  A second offering was the Hotel Coach, the ancestor of today’s airport shuttle.  Holding up to ten passengers and their luggage, and designed to be pulled by just one horse, the coach promised innkeepers an edge in attracting commercial travelers who had just arrived at the railroad depot and were in search of lodging.

Like today’s automobiles, the models of the American Carriage Company were available in multiple configurations.  A price sheet set out terms for open or closed buggies; A-, B- or C-grade leather; coil or elliptic springs; half or full platforms; quarter or extension tops (with lettering applied at “very reasonable charges”); and much more.

A finding aid for the American Carriage Company leaflets, and the rest of Dr. Slocum’s latest discoveries, can be downloaded here.

2 Responses to More from “Out of the Woodwork”