Her “Great American King and Queen” 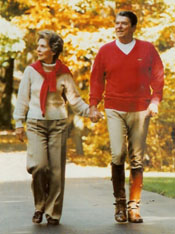 As we approach the 100th anniversary of Ronald Reagan’s birth (February 6), we can be sure that authors and pundits will continue to weigh in on the legacy of the nation’s 40th president.  Thousands of books–from Where’s the Rest of Me?  The Ronald Reagan Story (1965) to dozens of new volumes awaiting release in 2011–offer perspectives, both positive and negative, on Reagan and his political career.

Ronald Reagan has also inspired local authors.  WKU’s Special Collections Library holds a biography of Reagan written by Logan County native Betty Kathleen Hall (1908-1995).  Presented in the form of a narrative poem, the 184-page composition covers Reagan’s life from his youth (He was a lifeguard in the depression days / and he hitchhiked from town to town, / looking for radio work or, just anything–/ honest or honorable that could be found) to his and First Lady Nancy Reagan’s last days in the White House (Then suddenly, a commotion attracts us, / there’s a bustle of vigor and vim, / as we join all Americans and shout / “Good-bye!  Good-bye!” to them.)  Hall takes on the issues, personalities and controversies of the Reagan years, in every instance maintaining a thorough lack of sympathy for the President’s critics.

A finding aid for the Betty Kathleen Hall Collection can be downloaded here.  For other resources on Ronald Reagan at the Special Collections Library, search TopScholar and KenCat.

Comments Off on Her “Great American King and Queen”