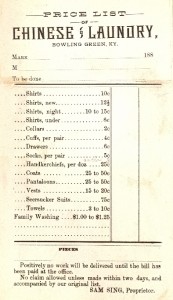 The Kentucky Library & Museum recently accessioned an interesting account book related to a Chinese laundry in Bowling Green.  The ledger, written in English, contains a few pages of customer accounts kept for Sam Sing, the operator of a laundry here in the 1880s.  At the back of the notebook is a small printed form which lists the types of work Sam Sing performed in his hand laundry and the corresponding prices for those services. We know nothing else about Sam Sing.  To view the finding aid for this collection click here.

In the late-nineteenth century United States, the occupation of laundry worker was heavily identified with Chinese Americans. Discrimination, language barriers, and lack of capital kept Chinese Americans from most available occupations.  Around 1900, one-fourth of all ethnic Chinese men in the United States worked in a laundry.  “Laundry work,” wrote one historian, “was especially wearisome, because it meant the soaking, scrubbing, and ironing of clothing solely by hand; moreover, prompt and high quality service was necessary to keep customers satisfied. Workers in laundries…received the going wage of twenty-five dollars per month, and despite long hours the work-week was seven days.  For the majority of the Chinese, then, the daily routine was almost solely working, eating, and sleeping. There were few other occupations available to Chinese.”

We do know of at least one other Chinese launderer that lived in Bowling Green, and unfortunately he met a tragic fate.  Kee Shuck operated a laundry on College Street.  He was murdered with a pair of scissors on May 30, 1896.  The culprit was never found, although the operator of a rival Chinese laundry was a prime suspect.  With no local family Kee Shuck was buried in an unmarked grave in Fairview Cemetery.  The Kentucky Library & Museum owns his city-issued burial permit.  His cause of death is listed as “murder” and his color “yellow.”  For more information on Bowling Green history, check out TopSCHOLAR and KenCat.

Comments Off on Chinese Laundry in Bowling Green Documented