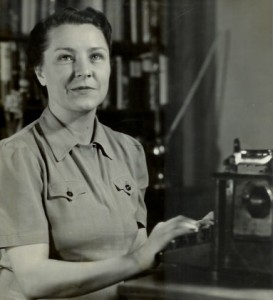 After she graduated from WKU in 1925, Anne Pence Davis moved to Wichita Falls, Texas with her new husband.  She became involved in marketing, literary and volunteer activities, including radio production, poetry writing and the Camp Fire Girls.  Davis’s interest in programming for the Camp Fire Girls led her to try her hand at juvenile fiction.  The results were three popular books for young adolescents, Mimi at Camp, Mimi at Sheridan School, and Mimi’s House Party.  Davis drew on her experiences in Bowling Green to create the character of Mimi Hammond, a red-haired extrovert who sometimes cast aside the Pollyanna-like qualities of her fictional contemporaries.  Davis’s success prompted her election to the Texas Institute of Letters in 1937.

Davis wrote two other well regarded works of juvenile fiction, Wishes Are Horses and The Top Hand of Lone Tree Ranch.  Her 1940 novel The Customer is Always Right, about the characters who populate a large Texas department store, was an alternate Book of the Month Club selection.  Throughout her career, Davis also published poetry, haiku and reviews, and participated in writer’s conferences, book fairs and workshops.

The papers of Anne Pence Davis are part of the collections of WKU’s Special Collections Library.  Included are correspondence with editors, colleagues and friends; scrapbooks; photos; poetry journals; and even a Braille edition of The Top Hand of Lone Tree Ranch.  Click here and here for finding aids.  To explore other collections relating to authors and poets, search TopScholar and KenCat.