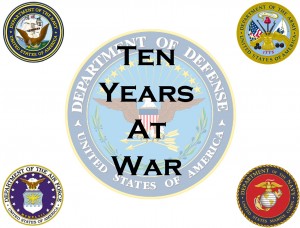 Stop by the reference area to see our display 10 Years at War, featuring books on terrorism, Afghanistan, and military service.  These books were chosen to highlight the 10th anniversary of the war in Afghanistan, and the sacrifices of our men and women in uniform. These books all come from our reference collection, and are just a sampling of what there is on the topic.

Comments Off on September Reference Book Display: 10 Years at War

Maggie Green, a seasonal cooking expert who specializes in culinary nutrition from Lexington, Kentucky, spoke at our WKU Libraries Kentucky Live series in Barnes and Noble about her new book The Kentucky Fresh Cookbook on the evening of September 8, 2011.

Comments Off on Maggie Green and “The Kentucky Fresh Cookbook”