“A Better Person for the Experience” 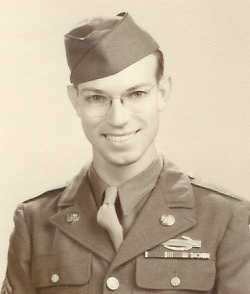 Graduating from high school at age 16, Dee Carl “D.C.” Perguson, Jr. (1921-2010) left his home in Horse Branch (Ohio County) in 1938 to attend Western Kentucky State Teachers College (now WKU).  He earned a bachelor’s degree in history, then entered the U. S. Army.  Perguson served in North Africa and Italy, where he was wounded in January 1944 and sent home to recover.  Earning his master’s degree in 1947, Dee began a life of teaching, travel and volunteerism.

Highlighting the personal papers of Dee Perguson, now part of the collections of WKU’s Special Collections Library, are his correspondence and diaries.  Begun while Perguson was a student at WKU, his diaries offer a detailed account of college life in the shadow of World War II.  During his military service, Perguson kept up a faithful correspondence with his parents in Horse Branch. After being wounded in action, he tried to reassure them.  “My injury is not really bad,” he wrote.  “Two bullets hit my arm, one bone is broken in my upper arm.  Done up in my plaster cast I am in fine shape” and, he continued, “probably a better person for the experience.”

Perguson’s post-war correspondence details his political, church and volunteer activities during his career as a high school teacher in Seattle.  He also kept journals documenting his year in England as a Fulbright Scholar (1949-1950) and his travel to the Soviet Union and Central America.  Ever the historian, Perguson also wrote retrospective essays about his youth and family in Horse Branch.

Click here to download a finding aid for the Dee Carl Perguson, Jr. Collection.  For other collections relating to Ohio County, World War II and more, search TopSCHOLAR and KenCat.

Comments Off on “A Better Person for the Experience”