Finding a Circus in Your Attic 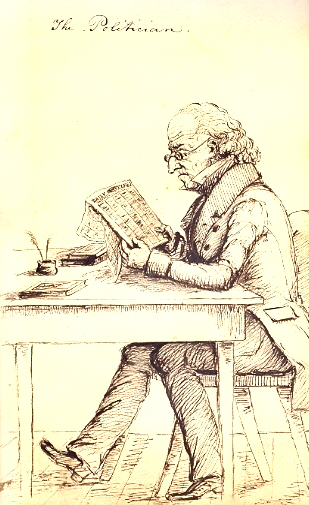 A drawing from Venable's sketchbook titled "The Politician."

Recently the Special Collections Library in the Kentucky Building received an addtion to one of its finest Kentucky family manuscript collections. The materials revolve around John Wesley Venable, Sr. and his immediate family. Venable was born on 30 March 1823 in Washington, D.C. He made an unusual journey as a 16-year-old to Florida, during which he kept a journal. The travel account, a new addition to the collection, is rather erudite for an adolescent, and it includes several pencil sketches and small watercolor paintings. In the late-1840s, Venable tried to make a living as an itinerant artist, first in Covington and then Danville, Kentucky. In 1847 he moved to St. Louis in hopes of succeeding as an artist. He soon returned to Kentucky, where he began painting and teaching art lessons. The collection contains several account books related to fees Venable charged for artwork as well as for art lessons and supplies. It also includes a magnificent, small sketch book featuring a number of Venable’s pencil and pen/ink studies.

In 1862, John entered the ministry and accepted the rectorship at St. John’s Episcopal Church in Versailles, Kentucky, a position he retained until 1882; simultaneously he had responsibilities for services in Goergetown, Kentucky. In 1882, he became rector of Grace Episcopal Church in Hopkinsville, Kentucky, where he stayed until his retirement in 1895. He and his family remained in Hopkinsville. His religious career is thorougly documented in 39 small diaries found in the collection, starting in 1862 and ending in 1907. The diaries include some personal observations, but chiefly record religious activities such as marriages, baptisms, funerals, etc.

John first married Sarah E. Farnsworth; she died in 1873 and was buried in Versailles. John and Sarah had three daughters:  Lizzie A., Mary Helm, and Julia. Lonley, John married Ann Frances “Fannie” Peyton Moore (b. 20 July 1849), who was from an old Christian County family, in 1888. The collection contains some interesting and early correspondence from the Moore family. Fannie died on 18 October 1938. She and John, Sr. are buried in Hopkinsville’s Riverside Cemetery. John and Fannie had one son, John Wesley Venable, Jr.

John, Jr. was born in 1888. He lived with his mother until her death. At an early age, his father taught John, Jr. the rudiments of drawing. He spent many hours drawing, reading, and constructing a large circus menagerie that was kept in the garret of the family home. He spent most of his life as a manger of movie theaters in Hopkinsville. He married Alice Lacey in 1942. The story of his circus menagerie was well known in the area, and it was passed on to Todd County native and author Robert Penn Warren by Frank Quarles Cayce of Hopkinsville. Warren used Venable, Jr. and his mother as prototypes for Bolton Lovehart and Mrs. Simon Lovehart in his noevella A Circus in the Attic. John, Jr. is buried with his wife in Hopkinsville’s Riverside Cemetery. The collection contains many of John’s fanciful drawings of circus and adventure scenes. A portion of the circus menagerie is owned by the Pennyroyal Museum in Hopkinsville.

Comments Off on Finding a Circus in Your Attic