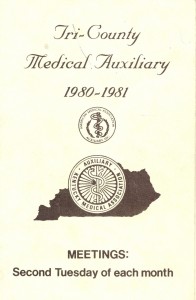 Members of the now disbanded Bowling Green Warren County Medical Society Alliance have donated the records of their organization to the Manuscripts & Folkife Archives at WKU.  If not for these posterity-minded individuals, the organization might only be remembered for two nursing scholarships that it administered for many years.  These scholarships–the Newman & Lena Harris Scholarship (begun in 1972) and the Maydelle Johnson Funk Scholarship (started in 1978)–will continue to be awarded annually to WKU nursing students under the aegis of the College Heights Foundation.

The organization had a long-standing commitment to nursing scholarships.  In the 1970s, the group inherited a scholarship program that had originated in 1952 as a collaborative effort of the Warren County Medical Society and the local chapter of the Business & Professional Women’s Club.  These scholarships were more formally organized as memorial gifts and bequests were received.  The organization’s archives includes lists of scholarship winners as well as applications from 1985 to 2011.  The collection also contains the organization’s administrative documents, membership directories, some newletters and photographs, news clippings, and several scrapbooks documenting the Alliance’s activities.  To see a finding aid for this collection, click here.  To see finding aids for other local club and organization archives search in TopSCHOLAR and/or KenCat.

Comments Off on Medical Society Alliance Donates Records to WKU