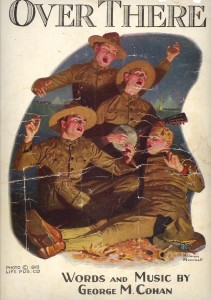 “Over There” sheet music with Norman Rockwell illustration, 1918.

Upon America’s entry into World War I in 1917 and the implementation of the Selective Service Act that same year, thousands of young men were drafted into military service. A recent addition to the Manuscripts & Folklife Archives collections contains letters of two of these WWI soldiers: brothers John and Andrew Johnson of Wooster, Ohio.

John, the eldest, was stationed at Camp Jackson and Camp Wadsworth, both in South Carolina, and Camp Upton, New York, before being sent to France in late 1918. While at Camp Jackson, John wrote to his mother of the numerous “vaccinations and inoculations” the soldiers must receive. John described that the shots made most of the men sick, but that they did not bother him at all. John also noted the prevalence of both venereal disease and influenza around the camps, thus leading to frequent quarantines.

John was sent to France in October of 1918, just a month before the war was over. Although he did not see any combat, John often wrote to his mother describing the conditions in war-torn France: “The French people here seem to be of the peasant class, the only thing they seem to have a good supply of is Beer and Wine…there is absolutely no candy to be had at any price.” As a farmer, John often compared techniques and equipment used in France to those used “back home.”

The younger brother, Andrew, was a student at Ohio State University before being drafted and sent to Camp Taylor in Louisville, Kentucky. While John was proud of his service in the Army, Andrew was far less patriotic; he spent much of his time attempting to get released. While Andrew mostly wrote to his mother of daily life at camp, he also described happenings in Louisville, including the ban on social activities due to the “Spanish flu” and a strike being conducted by the streetcar men (although he didn’t understand why they were striking considering they made “forty seven cents an hour”).  To see a finding aid for this collection click here.  To search for other World War I collections search TopSCHOLAR.

Comments Off on Brothers at War

Tagged as World War I