From Cover to Bibliography 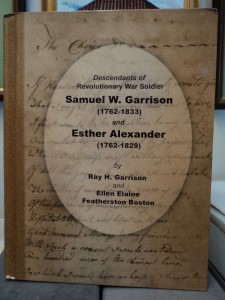 A new geneaology titled Descendants of Revolutionary War Soldier Samuel W. Garrison (1762-1833) and Esther Alexander (1762-1829) features many references to collections housed in the Manuscripts & Folklife Archives division of the Special Collections Library at WKU.  The book’s cover features a watermark of a manuscript poem written by Samuel about his ideal wife in the late eighteenth century. The late Ray H. Garrison, who is listed as a co-author of this book, found that WKU owned the original manuscript of this poem and a family geneaology via TopSCHOLAR, WKU’s online digital repository.  After locating the poem and geneaology Ray and fellow author, Ellen Elaine Featherston Boston, utilized other WKU collections via TopSCHOLAR including Warren County marriage records, wills, vital statistics, and military service records.

The book’s cover features a poem titled “Choice” written by Garrison about his future wife.  In it he outlines the type of woman he is interested in marrying:

I first would take a partner to my bed,

One ruled by reason not by passion led,

Whom I my wife most willingly would make,

Of all the joys I knew she should partake,

The better if near twenty years of age,

Of temper mild of understanding sage.

Whether his wife Esther met all his requirements, we do not know, but they did remain married for life.  Garrison was born in Maryland and migrated to Kentucky via Mecklenberg County, North Carolina.  He and Esther settled in southcentral Kentucky on Bay’s Fork Creek.  A monument praising his life and service in the Revolutionary War was dedicated on May 12, 2001 in the Old Scottsville Cemetery.

Comments Off on From Cover to Bibliography