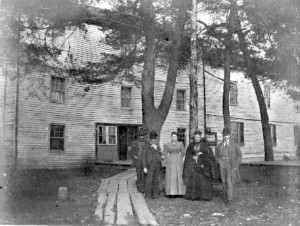 A family visiting the original Mammoth Cave Hotel in 1895.

Many researchers over the years have asked to examine the Mammoth Cave Hotel registers housed in the Manuscripts & Folklife Archives division of WKU’s Special Collections Library.  The folio-sized, bound volumes contain tangible evidence of the popularity of Kentucky’s biggest tourist destination:  Mammoth Cave.  These original registers capture the signatures of visitors to the attraction from 1858-1866.  The original Mammoth Cave Hotel was built in 1835 and housed visitors from around the world, including Great Britain, France, Germany, India, Peru, and Canada.  Within the United States, visitors came from every state.  The registers detail the visitor’s name, arrival date, residence, and destination.  The majority of the visitors list their destination as “the cave,” but a few unique comments include: “hole in the ground”, “I don’t know”, “all parts of the U.S.A.”, “Dixie”, or “heaven.”  Occasionally, the hotel clerk would comment on the weather for that day, or provide additional information about particular groups at the hotel.  Some interesting groups that passed through the cave and stayed at the hotel included the Associated Press, Orpheus Members, and Union soldiers during the Civil War.  One brave wag actually signed in as Abraham Lincoln on March 12, 1863.  The 1835 hotel was replaced in 1925; the current Mammoth Cave Hotel was erected in 1965 and the 1925-era structure was razed in 1979 after a vociferous effort was made to preserve the venerable building.

A small poem found in the register, memorializes the cave’s dark beauty, stating that “caverns dig as deep as Hell…and from his boat old Charon kicks And builds a bridge on river Styx.”

A finding aid to this collection can be found by clicking here.  To see other matericals related to Mammoth Cave or the Mammoth Cave National Park, search TopSCHOLAR or KenCat.