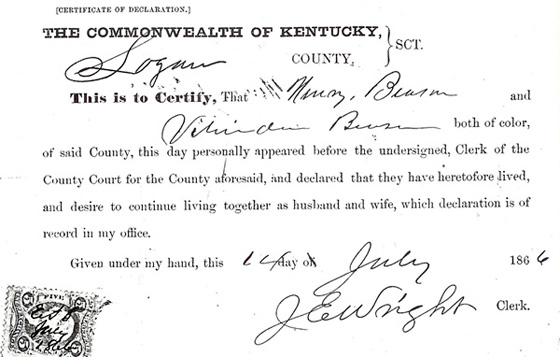 Among the many indignities visited upon enslaved African Americans was their disqualification from entering into civil contracts, most notably marriage.  Many slaves, nevertheless, performed their own marriage ceremonies in which they pledged themselves to each other as husband and wife.

With emancipation came the freedom to marry and to have the marriage legally recognized.  In A History of Blacks in Kentucky, WKU professor Marion B. Lucas writes that “[s]tate laws prohibiting legal marriages for blacks and mulattoes remained in effect until February 14, 1866.  Then an 1866 law declared cohabiting blacks legally married and their children legitimate if they paid a fifty-cent fee and recorded with a county clerk their intention to remain husband and wife.”

Exactly 5 months after it became legal to do so, Nancy and Vilindee Beason appeared before the clerk of the Logan County Court and declared that they had lived together and desired to keep living together as husband and wife.  Their declaration was duly filed, but like many newly freed slaves, they may have had difficulty paying the extra 25-cent fee required to receive a marriage certificate to take home with them.

A copy of the Beasons’ declaration is part of the Manuscripts & Folklife Archives collections of WKU’s Special Collections Library.  Click here to download a finding aid.  For more of our collections relating to African Americans, search TopSCHOLAR and KenCat.

Comments Off on Marriage Rights Expand in 1866