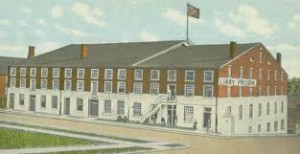 Prison escapes make for good stories.  Stir in the additional aspects of the U.S. Civil War and the atrocious conditions of the famed Confederate Libby Prison in Richmond, Virginia, and you have all the makings of a great narrative.  One of the most stirring of all Civil War prison escapes involved a Kentuckian. Andrew Graff Hamilton (1833-1895), of Butler County, Kentucky, served in the 12th Kentucky Cavalry (Union) and worked his way up to the rank of Major.  He was captured at Jonesboro, Tennessee, in August 1863 and sent to Libby, the Confederacy’s sole prison for Union officers.

While at Libby, Hamilton met Colonel Thomas E. Rose, who shared his desire for freedom and a return to active service.  They formulated a daring scheme to escape.  By prying loose bricks from an old kitchen fireplace, they were able to access the prison’s basement known at “Rat Hell” because of its numerous rodent denizens.  From the basement, they determined to tunnel to a nearby open sewer and escape.

As the plan developed, more men were involved.  They took turns digging the tunnel, because lack of lighting and oxygen exhausted the men who were only working with a broken shovel and two knives.  After a tunnel to the open sewer failed, the men decided to burrow fifty feet eastward to a lightly-guarded adjacent warehouse.  On the night of 8 February 1864, the tunnel was completed.  The following night, 109 Union officers used the tunnel to escape.  Forty-eight were quickly re-captured, but the others reach freedom, including Hamilton.

Hamilton’s participation in this celebrated escape was known, but not properly documented until 28 years later, when the Libby Prison was effectively razed and reconstructed at the World’s Columbian Exposition in Chicago.  At a reunion of the surviving participants in Chicago, Hamilton’s role as the project’s chief engineer was acknowledged.  Only two years later, Hamilton was murdered by two drunk youths right outside Morgantown.  The celebrated prison escapist was 62; he was buried at Reedyville.

On Saturday, 15 June 2013, a historical marker was erected to recognize Hamilton’s role in the Libby Prison escape.  Located on the courthouse lawn in Morgantown, the marker extols Hamilton as “a leader of one of the most incredible prison escapes of the Civil War.”

The Manuscripts & Folklife Archives unit of the Special Collections Library owns some original documents and numerous news clippings about Hamilton that were donated by his family.  To see a finding aid to this small collection click here.

Comments Off on A Daring Escape