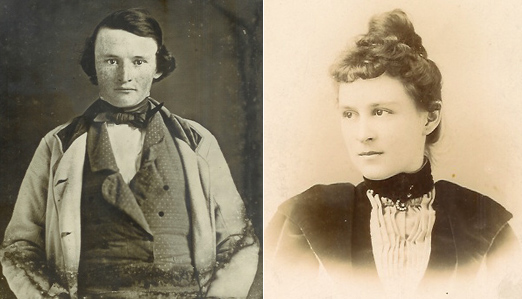 Through the mid-19th century, Ryan Monroe Robertson (1827-1883), a young merchant in Bowling Green and Woodburn, kept in touch with his friends and extended family in Tennessee, Alabama and Texas.  Cousins, siblings and their spouses wrote to him of births, deaths, life on the farm, and other everyday matters.  But a recurring topic was matrimony: who was achieving it, where they were finding it, and how the still-single might join the club.  The gossips, however, were not stereotypical husband-hungry women; rather, it was Robertson and the young men of his circle who were preoccupied with their chances of finding a mate.

It might have started on the day a phrenologist examined Robertson’s skull for clues to his personality and declared him to be “very fond of the Ladies.”  As he entered his mid-20s, he made no secret of his yearning for a wife.  “[Y]ou stat[e] in your letter that you wanted to mar[r]y and if I cou[l]d find any yo[u]ng lady that wanted to mar[r]y to send you,” wrote cousin Martha McWilliams from Alabama.  From Louisiana, his sister Ellen Skaggs encouraged him to come “down here to catch yo[u]ng girls fore there are as many girls as frogs.”

Robertson’s buddies were no less circumspect about their designs.  One was ready to try marriage to cure his health problems “provided that I can git some gally to believe the same way.”  “You may tell the young ladies of your acquaintance,” drooled Simpson County neighbor and friend Berry Whitesides, “that if any of them wishes to marry. . . I will be prepared to say to them in the language of the poet, ‘Pretty girl I want a wife.'”  In the meantime, there were always opportunities to dish about the romances of others.  Robertson heard from his cousin Sarah Malone that “Thomas [Hargroves] is still leaning up to cousin Adaline like a kitten to a hot rock.”  (Mr. Kitten and Miss Rock wed in 1852).

In 1858, Ryan Monroe Robertson finally tied the knot with Jane Elizabeth Potter of Bowling Green.  Soon, it was their children’s turn to contemplate matrimony.  But when their daughter Lattie married Phineas Hampton Coombs in 1892, one of her former beaus advised her to retire whatever lovey-dovey tactics she had used to bring “Hamp” to the altar.  “Please don’t act like newly married people,” he implored her.  She shouldn’t drop by her husband’s office three times a day, or cry if he missed dinner.  Above all, she shouldn’t be spooney.  Perhaps he was simply jealous as he watched one more “frog” leap out of the pond.

The Robertson letters are part of the Coombs Family Collection in the Manuscripts & Folklife Archives section of WKU’s Special Collections Library.   Click here to access a finding aid.  For other collections involving courtship and marriage, search TopSCHOLAR and KenCat.

Comments Off on Love & Marriage