A Summer of Anxiety

On May 20, 1861, the Commonwealth of Kentucky officially declared itself neutral in the growing Civil War.  Neutral?  In the words of “Aunt Jane,” the fictional elderly storyteller created decades later by Bowling Green author Eliza Calvert Hall, “You might as well put two game-roosters in the same pen and tell ’em not to fight as to start up a war between the North and the South and tell Kentucky to keep out of it.” 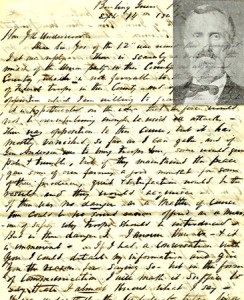 Robert Rodes and his warning letter

Indeed, by August 1861, with armies on both sides recruiting volunteers, Kentucky’s neutrality was in danger of collapse.  In Bowling Green, lawyer and Union supporter Robert Rodes (1824-1913) wrote two letters to his colleague, Joseph Rogers Underwood, then serving in the state legislature, setting out his fears of invasion.  “We are growing a little feverish here just now,” he admitted.  He was particularly agitated over the news of thousands of Southern troops camped just across the Tennessee state line.  Were they to acquire sufficient arms, he insisted to a skeptical Underwood, “you would see my predictions verified to the letter and all the territory south of Green River, in the Confederate power before the end of a week.”  Enemy occupation, he reminded Underwood, would result in “the necessary scattering of families; foraging of scouts & quartering of troops will follow and we will be at the mercy of one of the most merciless & audacious Rebellions on Record.”

A few days later, Rodes believed that the threat was serious enough to justify bringing Federal troops into the region to pre-empt a rebel attack.  The time for negotiation and petty arguing about “who first violated Kys Neutrality” was past.  Rodes saw infrastructure–roads, bridges, railroads–in peril, but he also saw a “moral danger” in the form of economic opportunism.  Demoralized by their government’s inaction, some Unionists had become content to buy up cattle and provisions, smuggle contraband, and sell their services to the Confederates.  Soon, Rodes warned, “we will find ourselves. . . seized, held & bound by an army of traitors.”  Four days after he wrote this letter, Confederate troops arrived to begin a five-month occupation of Bowling Green.

Robert Rodes’s letters are part of the Rodes Collection in the Manuscripts & Folklife Archives section of WKU’s Special Collections Library.  Click here to access a finding aid.  For other collections relating to the Rodes and Underwood families, search TopSCHOLAR and KenCat.

Comments Off on A Summer of Anxiety