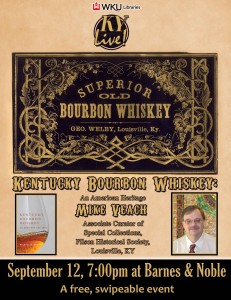 Mike Veach is Associate Curator of Special Collections at the Filson Historical Society in Louisville and according to Imbibe Magazine, the only professional bourbon historian in the country.  He’s a native of Jefferson country whose family roots extend to Barren County, KY and Scottsburg, IN.  He says he had no idea what he wanted to be when he grew up and thus entered college almost a decade after high school.  He pursued an interest in history developed in grade school at the University of Louisville where he received his BA and MA in history.  After college he went to work for United Distillers as the North American Archivist for four years until they sold their bourbon brands and closed their archive in 1996.  He joined the Filson Historical Society in 1997.  In July of this year he became the official “Bourbon Historian” for the Society concentrating on bourbon events.  He teaches the “Filson Bourbon Academy,” an eight hour course on Bourbon history and tasting, several times a year.  He’s written articles on bourbon for numerous print and online publications. 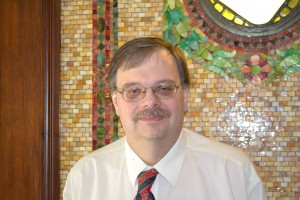 In March of 2013 his book “Kentucky Bourbon Whiskey: An American Heritage” was published by the University Press of Kentucky to considerable acclaim. The book seeks to delve past myths and legends and reveal the true story of bourbon production and culture in Kentucky and North America. It begins with the Whiskey Rebellion in the 1790s, running through the Industrial Revolution, the Civil War, Prohibition, the Great Depression, and the postwar period up to the present day. In each era, Veach discusses the technology behind the changing production of bourbon, how the Pure Food and Drug Act affected the industry, and how Kentucky bourbon survived and expanded through Prohibition and after. 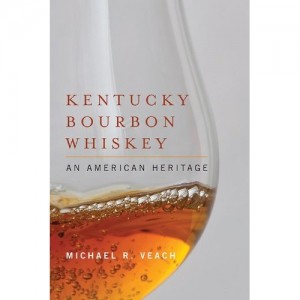