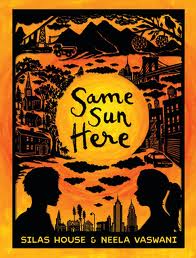 Western Kentucky University Libraries has selected Same Sun Here, written by Silas House and Neela Vaswani, as the winner of the seventh Evelyn Thurman Young Readers Book Award. The national award was created to honor the memory of former WKU librarian Evelyn Thurman, who made significant contributions to children’s librarianship and literacy during her 25 years of service to the university and community. Books eligible for the award must be written or illustrated by a Kentucky author or illustrator or have a significant Kentucky-related connection.

A review for School Library Journal says, “This tender and breathtakingly honest story about unlikely friendships and finding common ground will captivate readers… In an era when social media permeates every area of our lives, Meena and River’s old-fashioned camaraderie through letters feels refreshing and true. Audiences will revel in this lovely story about a boy and girl who are not so different from one another after all.”

The selection committee was very enthusiastic about this year’s winners. Sean Kinder, WKU Librarian and Chair of the Selection Committee, shared the following comment: “There are moments for both protagonists in the story that are extremely poignant. Whether facing the threat of mountain-top removal or of eviction from a tenement—these young, disparate characters are united by their courage, strength, and integrity.”

Silas House—author and winner of numerous awards including the E.B. White Award, the Audie Award, the Nautilus Award and two-time winner of the Kentucky Novel of the Year–was born and raised in Eastern Kentucky. House serves as the NEH Chair of Appalachian Literature at Berea College and on the fiction faculty at Spalding University’s MFA in Creative Writing program. House is a former commentator for NPR’s “All Things Considered” and a former contributing editor for No Depression magazine. He is also one of Nashville’s most in-demand press kit writers. A former writer-in-residence at Lincoln Memorial University, he is the creator of the Mountain Heritage Literary Festival.

Neela Vaswani is author of the short story collection Where the Long Grass Bends, and a memoir, You Have Given Me a Country. She is the recipient of the American Book Award, an O. Henry Prize, the ForeWord Book of the Year gold medal, the Nautilus Book Award gold medal, an Audie Award, and many other honors. Her fiction and nonfiction have been widely anthologized and published in journals such as Epoch, Shenandoah, and Prairie Schooner. She has been a Visiting-Writer-in-Residence at more than 100 institutions. She has a Ph.D. in Cultural Studies, lives in New York City, and teaches at Manhattanville College’s MFA in Writing Program and Spalding University’s brief-residency MFA in Writing Program in Louisville, Kentucky.

Both House and Vaswani will be honored at an awards luncheon at the Kentucky Museum in November. While in the area, both authors will visit local schools as part of the Southern Kentucky Book Fest’s “Fall into Books” program. House will also talk at the Warren County Public Library on Thursday, November 21 at 6 p.m. To learn more about the authors, go to silashouse.org and neelavaswani.com. For more on Evelyn Thurman, go to wku.edu/library/awards/thurman_bio.php.

This program is made possible by the Evelyn Thurman Children’s Author Fund, the Southern Kentucky Book Fest partnership, and WKU Libraries.