A Most Photographed Donkey

Mammoth Cave was and continues to be one of the outstanding scenic attractions in America. It was Kentucky’s first tourist attraction and visitors have been coming since 1816. Many guests stayed in rustic cabins or at the Mammoth Cave Hotel, which was at one time, considered a fine hotel. It was destroyed by fire on December 9, 1916. A newspaper article from the Louisville Times reported:  “Mammoth Cave Hotel Destroyed By Fire, Historic Structure Caught Fire From an Unknown Source Early Saturday Morning. The original Mammoth Cave Hotel, a part of which was built in 1811, was entirely destroyed by fire, of unknown origin, which started at three o’clock this morning, consuming the hotel in two hours. All the registers of the hotel and cave, which contained perhaps the greatest collection in existence of the autograph signatures of famous men and women of this country and other parts of the world, were destroyed. The registers of the Mammoth Cave and the Mammoth Cave Hotel, which in part were more than a century old, contained the names of such famous personages as the late King Edward of England, Jenny Lind, Edwin Booth, the Grand Duke Alexis of Russia, and Don Pedro of Brazil.”

The Hotel and cabins were also the background for many photographs. James Davis Rodes is shown posed on the infamous and also well photographed donkey. In our photographic collections, a donkey shows up many times with many different people. James was the son of Judge John Barret Rodes and Elizabeth Hines Rodes. Sadly, he died at an early age in 1914. (Note that some of the Mammoth Cave Hotel registers were not destroyed and are in the Manuscripts Division of the Department of Special Collections.)

To access finding aids for these Mammoth Cave collections, a part of the Manuscripts & Folklife Archives holdings of WKU’s Department of Library Special Collections search TopSCHOLAR and KenCat or email spcol@wku.edu for more information about photographic holdings. 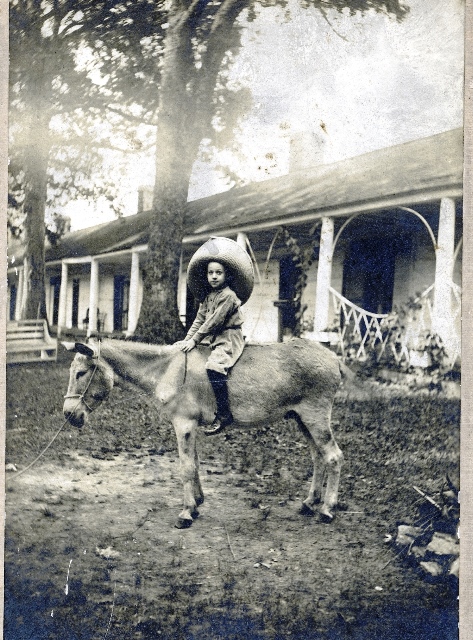 Comments Off on A Most Photographed Donkey