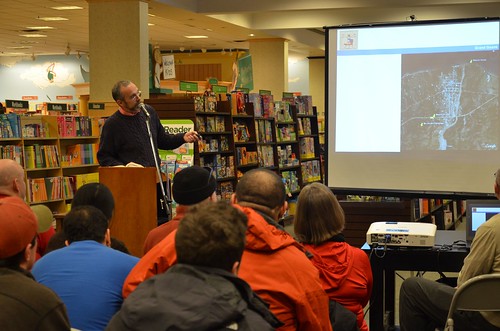 Paul E. Fallon, an architect from Massachusetts who specializes in healthcare design, gave a presentation on his architectural design experience in Haiti, an earthquake-prone country in Central America, to an audience mostly of WKU students of architecture at Barnes & Noble on February 19, 2015. The presentation was part of the WKU Libraries’ “Far Away Places” speaker series.

Paul Fallon spent thirty years as an architect specializing in healthcare design before the Haiti earthquake.   At 8:00 P.M. January 12, 2010, he learned from his sister that a strong earthquake had nearly devastated the tiny, lovely nation of Haiti. As an architect, Paul had volunteered to design a clinic there for Forward in Health, a non -profit medical group from Gardner, Massachusetts. In fact, he had been there just about six months earlier claiming that as middle- aged divorced man with grown children, he’d rather build houses than sit on a beach or ride a tour bus. So, wanting to help, he offered his assistance based on the knowledge, discipline and the logic he had learned as an architect, with the aim of helping the Haitians construct stronger buildings capable of surviving future disasters.

On his second visit to Haiti, Paul met Len Gengel whose interest in Forward in Health’s work was inspired by his daughter who died in the earthquake, and for whom he wanted to build an orphanage to honor her. Len’s daughter and others from Lynn University were on a service trip to Haiti, and Britney was one of the 250,000 who died in the hurricane. Thirty-three days after the earthquake, her remains were found and her devastated father’s grief was so profound that Fallon would do anything to ease his pain. Together, they decided to design and build a memorial which would sooth the family’s grief and provide a home for Haiti’s children.

By September 2010 the project was underway. All of the above serves as background for an extraordinary book that posits many more stories, tragedies, friendships, frustrations, shortcomings in a tiny country where poverty and poor education work side by side with those who crave perfection. Yet the story is one where construction becomes the stage for relationships, for teaching the unlettered, for schooling those with promise, for changing strategies and personal control so that the joy of sharing blossoms.

We hope you’ll join us on Thursday, February 19 at 7 p.m. to hear Paul Fallon tell his moving story in our next Far Away Places series at Barnes & Noble.  A book signing will follow.

Comments Off on Architecture by Moonlight: Rebuilding Haiti, Redrafting a Life