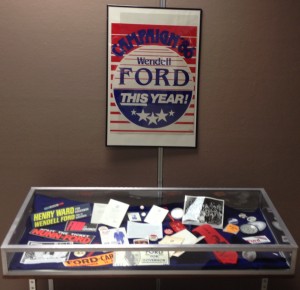 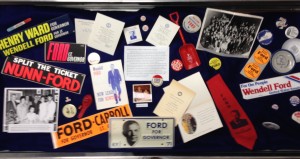 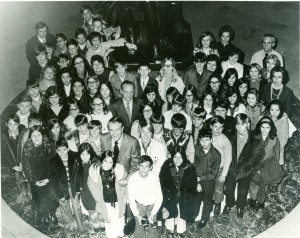 In honor of Wendell Ford’s years of service to Kentucky and the United States, WKU Library Special Collections opens a case exhibit on President’s Day (February 16, 2015) which will be available to visitors until May 15, 2015 in the Harrison-Baird Reading Room of the Kentucky Building. The exhibit includes bumper stickers, campaign pins, a license plate, an emery board, photographs, invitations, a necktie, a toy shovel, a Christmas card, a campaign poster, and a Louisville Stoneware saucer.
Wendell Hampton Ford served as chief assistant to the Kentucky Governor from 1959-61; thus beginning, his forty-year fight for Kentuckians that included years in the state senate (1965-67), as lieutenant governor (1967-71), as Kentucky governor (1971-74), and as United States senator (1978-93). A Democrat, Ford was the first person to be elected successively lieutenant governor, governor and U. S. senator from Kentucky. He was only the second 20th century lieutenant governor who, as a Democrat, served under a Republican governor.
In his state of the commonwealth address, Governor Ford stressed the need for government to be reorganized, more responsible and more representative. No Kentucky legislative bill Governor Ford supported failed to pass and he vetoed several measures. As United States Senator, he served as Democratic Whip (1991-99), chairman, Committee on Aeronautical and Space Sciences (1977-78), Democratic Senatorial Campaign Committee (1977-82), Select Committee to Study the Committee System (1983-84), Committee on Rules and Administration (1987-94), Joint Committee on Printing (1989-1994).

Comments Off on FIGHTER FOR PEOPLE: WENDELL HAMPTON FORD, 1924-2015