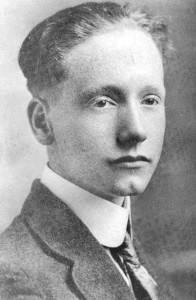 The Center for Robert Penn Warren Studies and the Department of Library Special Collections at Western Kentucky University (WKU) are pleased to announce the acquisition of Driftwood Flames, the first poetry anthology containing Robert Penn Warren’s poems.  The Poetry Guild of Nashville published the limited edition compilation in 1923.  The anthology, dedicated to influential Vanderbilt English professor John Crowe Ransom, includes five poems by Warren:  “The Fierce Horsemen,” “Wild Oats,” “Iron Beach,” “To Certain Old Masters,” and “The Golden Hills of Hell.”  Later in life, RPW had  no kind words to proffer about his early efforts.  In a poem, “Red Tail Hawk and Pyre of Youth,” Warren described himself as burning “a book/Of poems friends and I had printed in college.”

Published when Warren was a sophomore at Vanderbilt University, Driftwood also includes poems by fellow poet Andrew Lytle, who along with Warren was a member of the Fugitives, a literary group composed of Nashville residents who shared an interest in poetry.  Although some of the other poets included in Driftwood do not have easily recognized names, many of them enjoyed distinguished academic careers:  John Paul Abbott taught English at Texas A&M University, Warren Taylor was a professor at Oberlin College and published several books including an important textbook Poetry in English, and Richard S. West, Jr. taught humanities at the U.S. Naval Academy.

Driftwood Flames is important because of its association with the Fugitives and because it is Warren’s first published verse in an anthology.  The volume is rare, because it was produced in a limited edition of only 325 copies and because it is soft bound.  Soft bound books cannot generally endure the same wear and tear that a hardback volume receives.  These factors, combined with the age of the piece, make it difficult to find.  “We consider WKU’s Warren collection to be one of the finest in the country, and anyone conducting serious Warren research should include WKU in their itinerary,” said Center co-director and Robert Penn Warren Library curator Jonathan Jeffrey.  “We are thrilled to add Driftwood Flames to the collection. It was one of only a handful of Warren items the collection lacked.”

Founded in 1987, the Center for Robert Penn Warren Studies at Western Kentucky University honors the legacy and achievements of native Kentuckian Robert Penn Warren, the first poet laureate of the United States and the only person who has received Pulitzer Prizes for both poetry and fiction. The Center is proud to celebrate Warren’s life and work by increasing awareness of Warren’s achievements, curating an extensive collection of Warren-related memorabilia, artifacts, and documents, and, in collaboration with the Robert Penn Warren Circle, supporting an annual symposium on Warren every April.