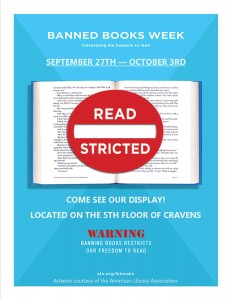 WKU Libraries celebrates Banned Books Week between September 27 – October 3 to support the efforts of librarians in promoting intellectual freedom and combating censorship. To mark this week there are Banned Books Week displays on the 5th floor of Cravens library and at the Educational Resources Center (ERC) in Gary Ransdell Hall. All books in the displays are available to be checked out! 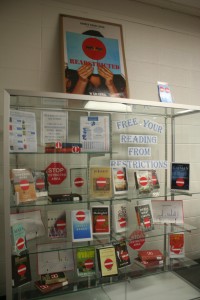 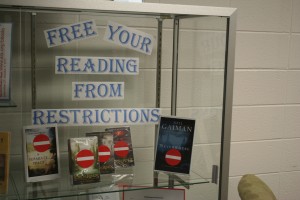 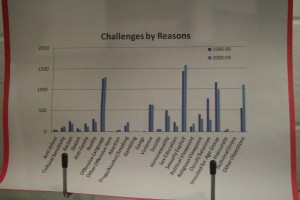 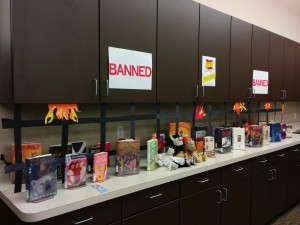 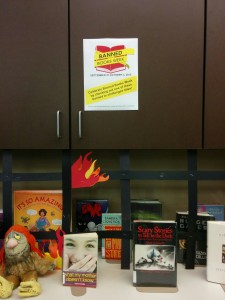 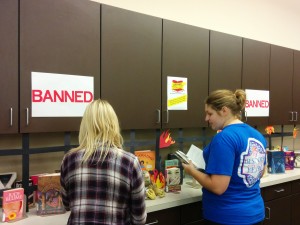 The American Library Association maintains a list of the titles and reasons for frequently challenged books.

Below is an excerpt of an article published this week in American Libraries about Banned Books Week and the continued importance of fighting censorship for the freedom to read.
http://americanlibrariesmagazine.org/blogs/the-scoop/banned-books-week-roundup-2015/

As Banned Books Weekis celebrated September 27–October 3, it’s helpful to remember that there is still a need for vigilance to ensure the freedom to read. In 2015, books are still challenged (when an individual or group requests the removal or restriction of materials from a library or curriculum) and banned (when materials are removed outright from circulation), not only in the United States but in other countries as well.

Kristin Pekoll, assistant director of the American Library Association’s Office for Intellectual Freedom, says that librarians and teachers often feel frustrated by these efforts to restrict the scope of reading. “More and more, they are reaching out to our office for support because they’re feeling silenced by their administrations,” she says. “While the fear of losing their jobs is real, more often librarians tell me about professional retaliation in the form of book budget cuts or bad evaluations. The theory is that if their lives are made miserable enough, they’ll quit, and the books will be censored because no one is there to defend them.”

Here is a roundup of recent instances of book challenges in US school libraries, as well as one public and one academic library:

Two notable instances of book-banning occurred this year in Italy and New Zealand:

The purpose of Banned Books Week is to draw national attention to these efforts to remove or restrict access to books or other materials, even those that some consider unorthodox or dangerous. OIF’s Pekoll summed it up: “The more we talk about these cases and bring the harms of censorship to light, the more courage and endurance librarians will have when they need it the most.”