It was courtship of a different kind.  From September to December 1943, the War Department conducted a 10-week nationwide drive to attract 70,000 recruits to the Women’s Army Corps (WACs).  In order to free up more men for combat, women were urged to sign up for military duty as clerks, mechanics, electricians, parachute riggers, weather observers, truck drivers, radio operators, hospital technicians, and much more.  Kentucky’s goal for the campaign was 1,512 recruits, equal to the number of casualties the state had suffered in the war. 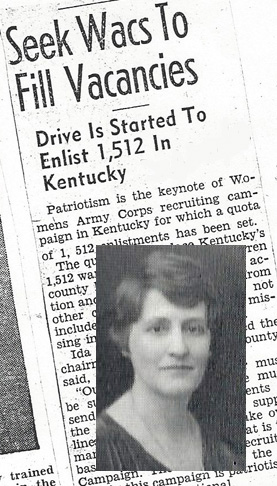 In Bowling Green and Warren County, where the goal was 27 recruits, citizens assembled in committees to organize the drive.  Among them was Mary Leiper Moore, WKU’s Kentucky Librarian, who was named chairman of the publicity committee.  Across her desk came draft press releases and other literature from the War Department to be used in the recruiting effort.  The Park City Daily News published articles based on these materials, touting the service opportunities awaiting women who became WACs.  Appealing to pride and patriotism, local businesses subsidized ads urging them to join.  “You Can’t Top Kentucky Women,” read one.  “They make the best WACs in the World!”

Not all, unfortunately, went as Mrs. Moore had hoped.  One of the major recruiting events was a stage show and dance at WKU on November 12, 1943, featuring a troupe of Army Air Force players and musicians from Louisville’s Bowman Field.  Coordination with the military brass, however, had broken down in the days leading up to the event (the appropriate military acronym for the consequences of such misfortune can be inserted here).  Confusion reigned regarding travel and accommodation for the performers, changes in venue (from an “unheated tobacco warehouse” to WKU’s Van Meter Hall, and then to the gymnasium in the Physical Education Building), and the timing of the show, which finally took place at the late hour of 10 p.m.

Afterward, Mrs. Moore write a stinging letter to the commander at Bowman Field.  The best efforts of local organizers, she complained, had been frustrated by the Army’s poor communication.  “Result, utter confusion and dismay of the public and auxiliary forces!”  The blame, she charged, lay not with “the women and the WACs” but with “the men and the Army”. . . specifically, its upper ranks: “If a Captain, Majors and several other officers can’t plan and successfully execute, over a few obstacles, a small show in a small town,” she asked, “what are they going to do when they get into combat?”

Click here for a finding to Mary Leiper Moore’s papers relating to the Warren County WAC recruiting drive, part of the Manuscripts & Folklife Archives collections of WKU’s Department of Library Special Collections.  For more collections on World War II and the WACs, search TopSCHOLAR and KenCat.

Comments Off on Mrs. Moore Goes to War