What I Learned in Summer School… 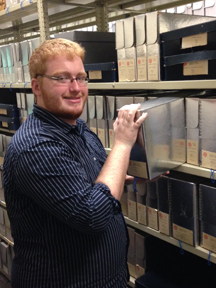 “Everyone has a story and I want to know what it is.” These words were spoken by the late WKU history Professor Carlton Jackson. This notion has formed a phrase that has stuck with me since I read them. My name is Gabe Sudbeck and during my time as an intern in WKU’s Library Special Collections Manuscripts unit, I spent a lot of time reading his work and looking over his research about the HMS Rohna and the 1918 flu epidemic. When I was home one night talking with my mother about my internship, and I found out that she (a WKU Alumna) had actually been a research assistant with Jackson during her time at WKU. She said that he was a wonderful man. While I personally never had the honor to meet him in person, I do believe that he was a fine man full of energy and passion for his field.

The stories that I read about in the collection concerned regular people dealing with survival and tragedy in world events. The sinking of the Rohna for example was a tragedy in which over 1000 American men lost their lives. Many were left adrift for three days. Many men began to think of their loved ones. One story featured a man lost at sea who could hear his wife telling him that he could pull though. Another consisted of a priest recalling the story of a member of his church who refused to be baptized due to fear of being submerged under water which reminded him of being adrift at sea for three days.

One thing I learned from the internship is the personal connections that the researcher makes with his subject when he begins to study a historical event or person. I have heard stories that David McCullough, when researching John Adams intended for it to be about both Thomas Jefferson and John Adams. But McCullough found Adams to be more interesting and under appreciated, despite his significant contributions. McCullough truly enjoyed his discovery and his research; in the same spirit Carlton Jackson relished each of his writing projects. If I have learned anything from studying his work, it’s that we all have our own story to tell from the greatest of tragedies to the minutiae of everyday life.

Comments Off on What I Learned in Summer School…