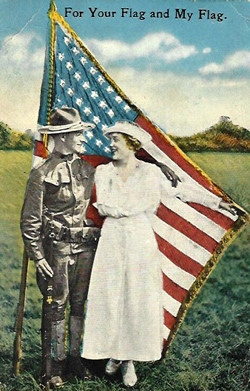 About 84,000 Kentuckians saw Army service in World War I.  About half of them served overseas, and out of a total of 2,418 deaths, 890 were battle-related.

In this anniversary year of the U.S.’s entry into the war, a web site now allows researchers easy access to information about the World War I collections in the Manuscripts & Folklife Archives of WKU’s Department of Library Special Collections.  Included in our collections are letters, diaries, photographs, military records, scrapbooks and other materials documenting the experiences of Kentucky soldiers and those they left behind on the home front.  Young men from the Commonwealth and elsewhere arrived at Camp Zachary Taylor, Louisville’s massive training site, where they were inoculated, drilled, and prepared for war.  They wrote encouraging letters to lonely wives and sweethearts.  They endured the ocean voyage to England and France, and marveled at the sights and strange customs “over there.”  Some of them escaped wounds and death from battle, only to succumb to influenza and other communicable diseases.

Click here to go to the site.  Each listed collection comes with a link to TopSCHOLAR, WKU’s digital repository, from which a finding aid explaining the collection in more detail can be downloaded.

Comments Off on Explore World War I

Tagged as World War I