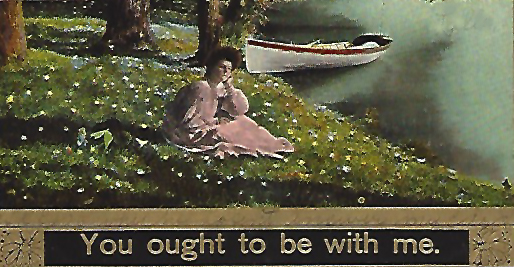 But there are other fish in the sea?

With the upheaval of the Civil War still a year away, Hattie Binford of Hickman, Kentucky was preoccupied with a smaller, more personal and yet equally consuming drama: the man who got away.  Perhaps because her friend Lucy (Parker) Robbins was 10 years older and married, 17-year-old Hattie looked to her for mentorship on matters of the heart.

Hattie had just experienced a sighting of the object of her affection, a certain “Mr. McBride,” she wrote Lucy in May 1860.  Unfortunately, her glimpse of him was as “the Bridegroom of another.  I had to summon all the courage and fortitude I possibly could to keep from showing my feeling,” Hattie mourned, “which was not very pleasant at that time I will assure you.”  But she vowed to rebound.  “There is as good Fish in the sea as ever was caught out so I will have the pleasure of catching another.”  For instance, that gentleman presently staying with Lucy, what was his name?  “Let me know if he is a candidate for matrimony,” Hattie demanded, “he can have my vote.”

Hattie filled her letter with other local news, including a visit from two admirers, but “I think I can do better than to take either of them.”  Her gold standard remained Mr. McBride, and she deputized her friend Lucy to “pick me out a nice Beau.”  He didn’t have to be rich, as long as he didn’t drink whiskey and play cards (to excess, that is).  “I want the jewel to consist of himself,” Hattie wrote dreamily.  “I want him to be handsome intelligent polite good natured,” as well as modest—“no profusion of fob chains Necktie or big words need apply, for they cannot fill my Eye.”

Click here to download a finding aid for Hattie’s letter, part of the Manuscripts & Folklife Archives collections of WKU’s Department of Library Special Collections.  For other letters about courtship and marriage, search TopSCHOLAR and KenCat.

Comments Off on “Fill My Eye”

“If we have to die had we not better die together?”  That was the question members of the Parker family of Hickman, Kentucky asked each other in spring 1861.  Lucy Robbins, the recently widowed daughter of Josiah and Lucy Parker, was staying with her brother-in-law near Memphis, Tennessee, but her parents were desperate to have her and their young grandson come home.  Letters to Lucy, part of the Manuscripts & Folklife Archives of WKU’s Department of Library Special Collections, provide a vivid picture of lives upended by the Civil War.

At the outbreak of war, the Mississippi River town of Hickman was still recovering from a fire so destructive that it was seen from Cairo, Illinois, some 40 miles away.  But now Cairo itself posed the threat, with rumors of soldiers massing there to mount an invasion from the North.  Lucy’s father had heard of still more troops gathering at New Madrid, Missouri.  Caught between these two armies, Josiah Parker feared that Kentucky “will again become the dark and bloody ground.”  Lucy’s mother wrote of the anguish of Hickman’s women: watching in fear as their husbands and sons chose sides and enlisted, many had packed up their households and were ready to “go to woods” if the enemy should appear.  “O what shall we do pray to god for our country,” she cried.

Each successive letter from home told Lucy of the war’s shadow over her family.  Her father, a local judge, lost his livelihood when the legislature temporarily suspended the courts.  Her brother Matthew joined the Union Army (and would die in service), even as some of his neighbors cast their lot with the Confederates.  Nevertheless, some of the town’s young women, including Lucy’s sister Lockey, refused to take a furlough from the marriage market and continued to preen in new dresses and bonnets whenever they could get them from places like St. Louis.  Lucy herself returned to Hickman in 1863, where she contemplated remarrying.  When she asked her dead husband’s brother for advice, he was clear: NO secessionists.  Having been financially generous with Lucy as long as she was widowed, Curtis Robbins declared that his continued support would be jeopardized if she allowed a Rebel to raise his brother’s child.

Lucy, however, didn’t listen.  Not only was he a Rebel, but her new husband, George J. Ligon, served under Confederate General Nathan Bedford Forrest and was severely wounded at Harrisburg, Mississippi.  If this condemned Lucy in the eyes of her brother-in-law, another young man who had worked for him and who remained Lucy’s friend was more forgiving.  Writing to her in 1864 during his Union Army service, he expressed regret that Lucy’s husband had been “crippled”; “I guess he is in the Southern army”—but, he shrugged, “you know it is all the same to me.”

A finding aid for family letters to Lucy (Parker) Ligon can be accessed here.  For more Civil War collections, search TopSCHOLAR and KenCat.

Comments Off on Hickman’s War