WKU Libraries held its anual Halloween Potluck Party on the morning of Friday, October 30th, 2009 in Room 111 in the Raymond Cravens Library. Big prizes were given to the three best costumes. Door prizes were won by some of the lucky party goers. Participants brought their favorite potluck dishes to the party including different kinds of beverages. Kudos go to the staff in the Dean’s Office, who did a fantastic job in getting the tradition of a Halloween party back on track.

Due to the running of the Medical Center 10K Classic, the Kentucky Library & Museum will open at 10:00 a.m. on Saturday, October 31st. Regular hours resume on Sunday, November 1st.

Comments Off on Special KYLM Hours on Saturday, October 31st 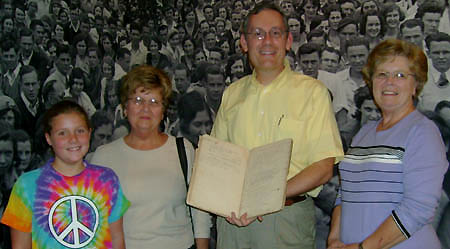 Civil War Letter from Bowling Green is a Treasure 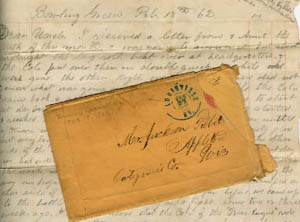 The Civil War came to Bowling Green in mid-September, 1861, with the arrival of General Simon Bolivar Buckner and about 1,300 Confederate soldiers.  They were soon joined by more than 20,000 troops who set up camp in and around the town.  From their fortified positions on surrounding hilltops, the Confederates looked forward to giving, in one soldier’s words, a “genteel whipping” to any Union forces foolish enough to confront them.  As winter set in, however, rainy conditions, poor food and shelter, inadequate clothing and rampant disease wore down the troops.

In mid-February 1862, facing the advance of a large Union force into the area, the Confederates decided to abandon Bowling Green.  Frank M. Phelps of the 10th Wisconsin Infantry was one of the soldiers who helped reclaim the area for the Federals.  Writing a long letter to his uncle back home, he reported crossing the Green River and camping at Munfordville before heading for Bowling Green.  During the brisk march, a “long cheer” erupted from the troops when word came that advance units were shelling the little town.  Phelps and his comrades encountered ponds that the Confederates had fouled with the carcasses of dead horses in order to deny fresh water to the enemy.  Once in Bowling Green, Phelps remarked on the extent of the fortifications, the destruction of the railroad depot, and the general disarray caused by the Confederates’ unceremonious departure.  The secessionists had “called their troops & run as fast as they could,” he wrote, “after setting fire to about 100 tins of salt pork.  [T]he streets are full of sugar salt beef & pork flour & every thing else.”  In a postscript, Phelps reported the capture of a “sesesh Captain” who had lingered behind and wore a disguise in hopes of evading detection.

This fascinating letter is now a part of WKU’s Special Collections Library manuscripts collections.  A finding aid and typescript can be downloaded here.

For more on our extensive Civil War resources, click here.

Lynwood Montell spoke at the KY Library & Museum on the evening of October 29 about his newest book, Tales from Kentucky Funeral Homes. An author of numerous Kentucky-related books and former faculty at WKU, Montell made his first appearance in WKU Libraries Kentucky Live! series. His tales of ghost stories in Kentucky and Tennessee are legendary, and his Halloween readings have been popular for many years.

Montell, a native of Rock Bridge in Monroe County, founded the Folk Studies Program at WKU in 1972 and taught several generations of students there between 1969 and 1999. He’s the author of 22 books with such enticing titles as: Ghosts Along the Cumberland; Killings: Folk Justice in the Upper South; and Haunted Houses and Family Ghosts of Kentucky.

In his newest book he recounts stories of unusual items in caskets, mournful pretenders, long-winded preachers, and even pallbearers falling into graves. They all serve to demonstrate the pivotal role played by morticians in Kentucky life and culture.

Western students had fun Saturday, October 17th, at the Kentucky Library & Museum learning the techniques of fabric dying. Dr. Laura McGee did a demonstration for the students. Some students were so enthused they completed two tie dyed scarves!

Twenty two local children spent their fall break at the Kentucky Library & Museum Arts Day Camp. While they were aptly improving their artistic skills, the campers also recycled waste paper into new hand made paper and learned about fabric transfer by designing and creating their own t-shirts. After-campers spent time learning about Kentucky history by spending time in the A Star In Each Flag: Conflict in Kentucky exhibit.

Archives are not a digital Mecca where every text of every document is online and searchable by keyword ~ archivist Luncinda Glenn, Graduate Theological Union Archives.

That being said, more and more individual images and documents are going online every day, along with descriptions of collections. These are put up to conserve fragile documents, to provide easier and greater access to records that are in high demand among researchers and to draw attention to an archives collections in order to bring people in for more indepth research.

Hilltopper Heritage is the University Archives “digital Mecca” for WKU sources including historic events, biographies of faculty, staff and alumni, photographs and departmental histories. You will find digitized yearbooks, College Heights Herald articles and building histories. While we will never digitize the entire collection, it is a good place to begin your research.  Hilltopper Heritage also allows for users to share their memories of WKU experiences with us through Share a Tradition.