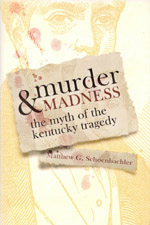 Matthew B. Schoenbachler, a history professor at Northern Alabama University, used materials from the Kentucky Library and the Manuscripts & Folklife Archives in writing his new book, Murder & Madness:  The Myth of the Kentucky Tragedy (University Press of Kentucky, 2009).  “The Kentucky Tragedy” refers to Jereboam O. Beauchamp’s murder of Colonel Solomon P. Sharp in Frankfort on November 7, 1825.  Schoenbachler deftly approaches the murder by examining the three parties involved:  Sharp, Beauchamp and the ever provocative Anna Cooke, whom he calls the “diminutive fury.”  It is a story of unbridled passion, romance and revenge.  The tale may resemble the plot of a modern romance novel, but it is a true tragedy whose chief characters hailed from southcentral Kentucky.  Within just a few short months, the three participants die:  one from murder, one from suicide, and one at the end of justice’s rope.

Anyone remotely interested in “The Kentucky Tragedy” will find this book an interdisciplinary jewel, for the author weaves the historic warp with the literary line to create a beautifully crafted work.  Local readers will especially appreciate the detailed regional information Schoenbachler provides about the incident’s three main characters and its lesser known participants.   Literary history enthusiasts will laud the author’s effort to authenticate the use of the “Tragedy” in mid-19th century American literature, as well as the incident’s most famous and strict interpretation found in Robert Penn Warren’s World Enough in Time (1950).  Surely “The Kentucky Tragedy” is representative of the Commonwealth’s mid-19th century history, one brimming with politics, passion and hyperbole.