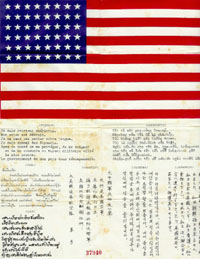 I am an American aviator.  My plane is destroyed.  I cannot speak your language.  I am an enemy of the Japanese.  Be so kind as to protect me, treat me and take me to the closest allied military office.  The government of my country will reward you.

They were called “escape flags” or “blood chits.”  Made of silk, about the size of a handkerchief, they reproduced the message above in several languages including French, Thai, Korean and Japanese.  During World War II, pilots shot down in foreign territory used the flags to identify themselves and obtain help from the local population.  If the pilot failed to survive, the serial number on the flag could offer a clue as to his fate.

WKU’s Special Collections Library holds two such escape flags in the collection of Warren County native and U. S. Navy veteran Cecil Murray Elrod (1923-2002).  The first is pictured at left, while the second shows the flag of Nationalist China.  Issued to pilots in the China-Burma-India theatre, it included a request in Chinese to shelter and protect the bearer, a “foreign person” who has “come to China to help in the war effort.”

A finding aid for the Cecil Murray Elrod Collection can be downloaded here.