Work by Dorothy Grider on exhibit at ERC 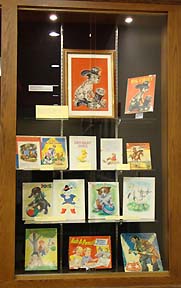 Driven to become an artist from the age of eight, Dorothy Grider studied at the Phoenix Art Institute of New York while attending Bowling Green High School (1927-1933) and Western Kentucky State Teachers College (WKSTC, 1933-1936). After college, she moved to New York, staying for a time at the Three Arts Club. Early in her career, Grider supported herself by illustrating holy cards and beauty parlor posters and later designed playing cards and greeting cards. Grider carved out a career as an illustrator of children’s literature and eventually became the favored artist for this material at Rand McNally. During her career, this artist illustrated 100 books, including six that she also wrote, and her work is available today in more than 200 libraries around the world. To learn more about the Dorothy Grider Collection at the Kentucky Library & Museum, search KenCat.

Comments Off on Work by Dorothy Grider on exhibit at ERC