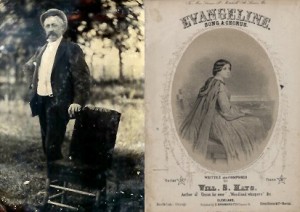 His name may have encouraged William Shakespeare Hays (1837-1907) to become a writer, but he resembled more of a musical Mark Twain than the Bard of Avon.  A river captain, journalist, poet and raconteur, the lifelong resident of Louisville composed hundreds of songs, several of which became much-loved standards of the 19th century.  A beautiful woman at an antebellum house party reminded Hays of Longfellow’s poetic story of “Evangeline,” and his song of the same name sold 150,000 copies in little more than a year.  After Hays overheard a fellow passenger on a mailboat imploring his sweetheart to return his affections, he was inspired to write “Mollie Darling,” which sold a million copies.  Hays’s legend as a balladeer grew so large that some credited him with composing that greatest of popular anthems, “Dixie.”  His journalism appeared in the Louisville Democrat during the Civil War and later in the Courier-Journal and Times, where his columns chronicled shipping, weather and other happenings on the Ohio River and became required reading for Louisvillians in-the-know.

WKU’s Special Collections Library holds a fascinating collection relating to William Shakespeare Hays that includes letters to his wife Belle, poems, song lyrics, sheet music, newspaper columns, royalty and copyright agreements, photos, and reminiscences of those who knew him.  Click here to download a finding aid.  For other collections on authors, journalists, musicians and poets, search TopSCHOLAR and KenCat.

Comments Off on William Shakespeare Hays