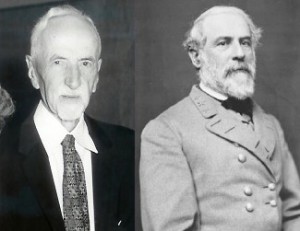 As we have previously reported, the 1957 renovation of Bowling Green’s Warren County Courthouse gave rise to some interesting discoveries.  Here’s another:

While dismantling the interior, workmen discovered some old file cabinets stowed in a forgotten corner.  Inside was a bundle of Warren Circuit Court criminal indictments dating from the Civil War, and in particular from the period following the six-month occupation of Bowling Green by Confederate troops in 1861-1862.

The persons charged in the indictments included not only local citizens who had aided and abetted the Southern cause, but three Confederate heavyweights: Generals John C. Breckinridge, Simon Bolivar Buckner, and John Hunt Morgan.  Their offense was to “wilfully, feloniously, and traitorously and with force levy war” against the Commonwealth of Kentucky by “uniting and assembling themselves into and with an army . . . of the so called Confederate States of America.”

Since these indictments had been handed down, however, the three men had redeemed themselves in the eyes of most Kentuckians.  Breckinridge was pardoned in 1868 and welcomed home from exile in Canada, Morgan became legendary for his audacious raids on Union forces, and Buckner went on to serve as governor of the same state he was charged with betraying.  Accordingly, early in January 1958, at the Warren Circuit Court’s opening session, Judge John B. Rodes quickly granted Commonwealth Attorney J. David Francis’s request to erase “the stain of indictments from the names of valiant Confederate generals and their followers” and dismiss all charges.  Newsweek magazine reported the decision in its January 20 issue, noting Bowling Green’s “warm, unanimous agreement” with the outcome — and Judge Rodes’s coincidental resemblance to General Robert E. Lee.

Comments Off on Case Dismissed