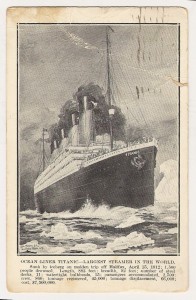 April 15, 2012 marked the 100th anniversary of the sinking of the Titanic.  It was one of the most written about disasters of the 20th century and has been the subject of endless speculation and countless books and articles.  Samford journalism professor Julie Hedgepeth Williams, in her fascinating A Rare Titanic Family: The Caldwells’ Story of Survival  tells the story of  how her great uncle Albert Caldwell, his wife Sylvia, and their 10 month old son Alden were one of the few families to survive the sinking of the Titanic.

After meeting as Park College students in Missouri, the Caldwells graduated with A.B. degrees on June 24, 1909, were married in Colorado Springs on September 1, 1909 and that very day set off for San Francisco to catch a ship to Bangkok, Siam (Thailand) where they would be working at a boys’ school run by the Presbyterian Church.

At the time of the disaster—they were returning to the US with their infant son after Sylvia became ill. Leaving Siam—they caught a German ship to Naples and then travelled overland by train and boat in time to secure one of the last tickets in second class aboard the Titanic. 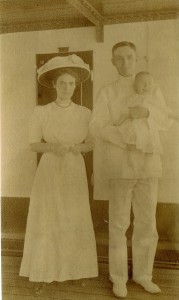 Family photo of the Caldwells

What makes this tale unique is the “before” and “after” parts of the story which would continue to impact the family for the rest of their lives.

Williams received her master’s in journalism and a PhD in Mass Communications from the University of Alabama.  She is the author of Wings of Opportunity: The Wright Brothers in Montgomery, Alabama, 1910.

She’ll be speaking in this month’s Far Away Places series on Thursday, November 15 at 7:00 p.m. at Barnes & Noble Bookstore (1680 Campbell Lane).  A book signing will follow.