Don’t Mess With His Mule 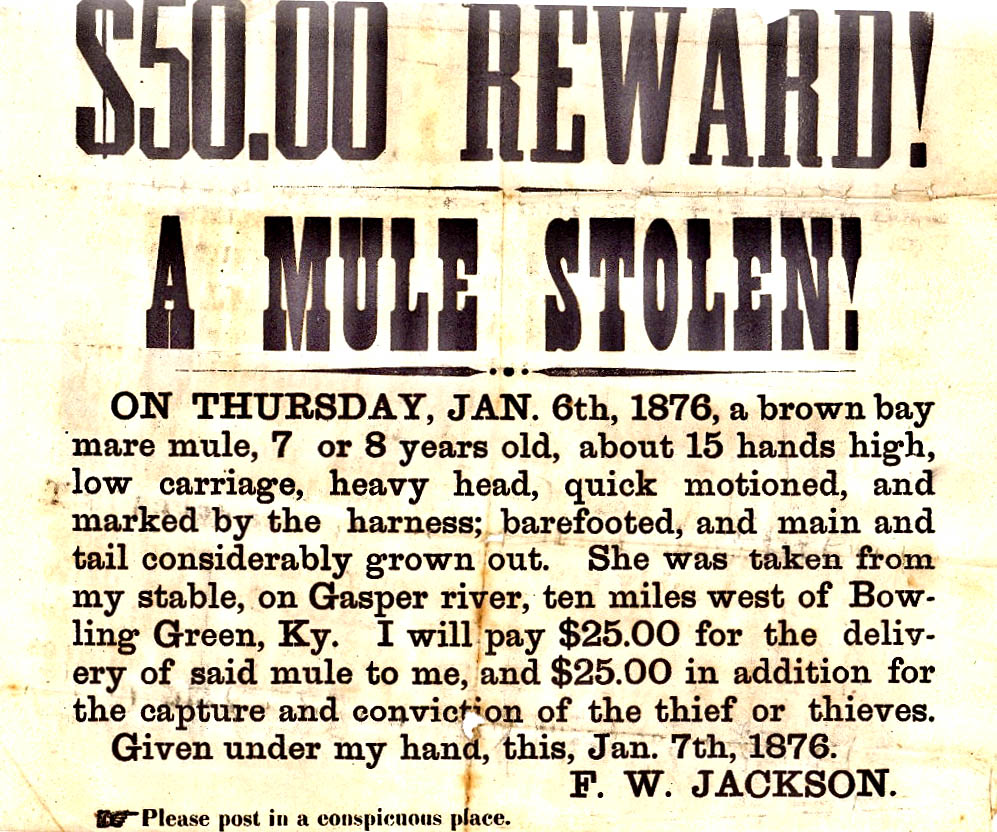 Recently while cleaning and organizing Commonwealth Court Cases in the Manuscripts & Folklife Archives unit of the Special Collections Library, workers came across an 1876 indictment from the Warren County Grand Jury in which Burwell Jackson was accused of “unlawfully, willfully, and feloniously” stealing a mule, the property of Frank W. Jackson.  Included with the file is a carefully worded, but terse, broadside describing the mule.  Jackson presents the animal’s appearance in great detail, providing color, age, height, and other defining features:  “low carriage, heavy head, quick motioned, and marked by the harness; barefooted, and main (mane) and tail considerably grown out.”

The animal was apparently taken right from Jackson’s own stable, ten miles west of Bowling Green on the Gasper River.  Jackson proffered $25 for return of the animal and an additional $25 for “capture and conviction of the thief or thieves.”  To insure that all passersby would see the broadside, Jackson had the printer place at the bottom of the piece:  “Please post in a conspicuous place.”

In testimony included in the jury’s deliberations, William Tisdale said that he did see “an advertisement of [a] stolen mule” and recognized the description as  being one held by Burrell Jackson of Logan County.  Mr. Jackson was indicted and charged with grand larceny.  Whether he was tried and convicted is still a mystery.  To see other court records held by the Manuscripts & Folklife Archives, search TopSCHOLAR

Comments Off on Don’t Mess With His Mule