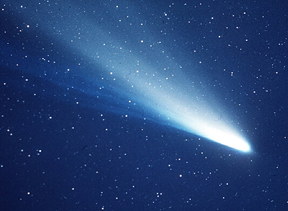 On this day (April 11) in 1986, all eyes were on Halley’s Comet as it passed its closest point to earth (39 million miles) before returning to the depths of space.  A few of the collections in the Manuscripts & Folklife Archives section of WKU’s Special Collections Library document the fascination and trepidation that these phenomena have evoked in humans across time.

Issachar Bates (1758-1837) recalled that as a child, he feared that “God would come upon me some day in judgment because I was not good” and he began to “watch the heavens” for signs of that momentous time.  Sure enough, he soon glimpsed “a blazing comet [perhaps the Great Comet of 1769] which could be seen every clear night for weeks.”  As if to underscore its terrible portent, it was trumpet-shaped, and sometimes “would look as red as blood.”

Lucilla Booker, who lived in the Shaker community at South Union, Kentucky, recorded the approach of Halley’s Comet in 1910.  “People in country all excited about the Comet all this year fearing it will do harm to some of them,” she wrote on May 18.  Nine days later: “Moonshines bright & People see Halley’s Comet with a new Tail on it.”

Meanwhile, over in Floyd County, Kentucky, young Sarah Copeland was witnessing the same wonder.  “My mother hollered ‘come out here you all, see what I’d seen,'” she remembered.  “And when we got outside. . . it just looked like an airplane. . . a great long tail.  And we watched it as far as we could.”  Later, she heard a rumor that the “thing we seen in the sky, they said it fell in Italy and burnt up a lot where it landed.”

Late in 1985, WKU faculty member Marjorie Clagett wrote alumnus Dee Carl Perguson that she was looking forward to the latest arrival of Halley’s Comet, but despite her work “determining compass points and degrees and elevation, and despite looking out the window at 3:00 every morning,” she was still waiting for a glimpse of the celestial visitor.

Click on the links above to access finding aids for these collections.  And be patient: the next chance to see Halley’s Comet won’t be until 2061.

Comments Off on Celestial Snowballs