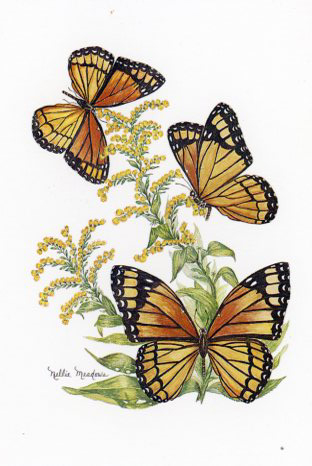 Many Kentuckians purchase license plates that sport a colorful butterfly, but few can probably identify the fluttering beauty as the Commonwealth’s state insect, the Viceroy butterfly.  And even fewer would know that two Warren County women led the effort to obtain that designation from the Kentucky General Assembly.

In 1987 State Garden Club of Kentucky (GCK) president and Warren County resident, Jo Jean Scott, asked a fellow Warren Countian, Lillian Pace, to serve as the organization’s “Chairman of Conservation and Preservation of Butterflies.”  Within a year, Scott asked Pace for a nomination of a butterfly for the state insect to present for approval at GCK’s October board meeting.  Scott even suggested the Black Swallowtail.  By December 1988, after contacting several state offices about the matter, Pace and Scott–with the help of R.A Scheibner, an entomologist at the University of Kentucky–had selected the Viceroy as the best candidate.

By January 1989, the the GCK had approved the Viceroy nomination and local politicians advised Scott and Pace to contact Senate President Pro Tem John “Eck” Rose of Clark County to sponsor the legislation.  Pace finally made contact with Rose’s office and the legislation was drafted.  She also communicated with Powell County artist Nellie Meadows about painting the butterfly and then issuing a limited edition print.  She instructed Meadows:  “I see the Viceroy more often in late summer feeding on goldenrod (State Wildflower), butterfly weed, and other milkweeds.  Use your discretion as to the plants you wish the Viceroy to be on.  I would like to have at least two Viceroy Butterflies painted in the picture or more; with wings open and wings closed.”

The resulting print was praised for its beauty and sales were brisk.  Rose was also successful in guiding the legislation through the General Assembly.  Senate Bill 29 was signed into law by Governor Wallace Wilkinson on 16 Mary 1990.  Pace’s interest in butterflies never waned, and she continued to serve as the GCK’s state butterfly chairman for another decade.  She was pleased when the image of a Viceroy was selected to appear on Kentucky license plates in 2002.

The Manuscripts & Folklife Archives unit of the Special Collections Library is honored to house the Pace Family Papers which contain Lillian Pace’s collected information about butterflies.  The collection documents her other gardening organization activities and contains information about the family of her husband, Bowling Green dentist Dr. Robert N. Pace.  Click here for a finding aid to the Pace Family Papers.  To locate other finding aids for our collections, search TopSCHOLAR.

Comments Off on Collection Documents the State Insect