Good(?) For What Ails You

Many of the collections in the Manuscripts & Folklife Archives section of WKU’s Special Collections Library offer evidence of the drastic treatments visited upon their patients by 19th-century physicians.

You will inject a large tea spoonful of the solution in the large bottle up each nostril three times a day. . . . a half hour after each injection you will drop up each nostril six or eight of the Black drops.  This was the sinus-rocking remedy prescribed about 1840 to Colbert Cecil of Pike County, Kentucky, for an unspecified ailment.  About the same time, W. P. Payne recommended to his cousin the following treatment for cholera:  In all cases of great puking and purging or cramp take 2 parts [of preparation] no. 6 & 1 part spirits of turpentine (warm) and rub the patients stomach bowels, spine legs & feet well with it. 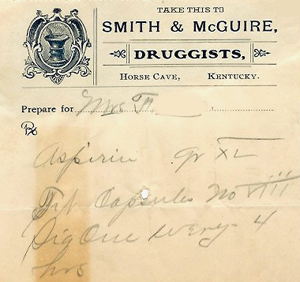 Many physicians originally acted as their own apothecaries, not only prescribing but preparing the potions they recommended.  With the late 19th-century separation of medicine and pharmacy into two distinct professions, however, patients began to take their prescriptions to a drugstore to be compounded by a pharmacist.  In addition, the 20th century brought closer regulation of dangerous or addictive pharmaceuticals.  Manuscripts & Folklife Archives collections include evidence of these developments.  Bowling Green druggist John E. Younglove, whose store was a fixture on the downtown square, kept recipes for pills, salves, tonics and other curatives for both humans and animals.  In Glendale, Kentucky, Dr. Warner J. Shacklett recorded his orders for opiates as required by a 1914 federal law.  In Hart County, doctors sometimes used prescription pads supplied by local drugstores, complete with advertising.  When national prohibition restricted the dispensing of remedies containing alcohol, Dr. James O. Carson of Bowling Green wrote Lattie Robertson Coombs an order for medicinal liquor (to wit, a pint of whiskey) on a Treasury Department form for delivery to her druggist. 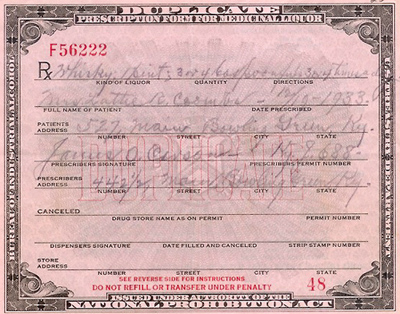 Click on the links to access finding aids for these collections.  For more collections relating to doctors and pharmacists, search TopSCHOLAR and KenCat.

Comments Off on Good(?) For What Ails You