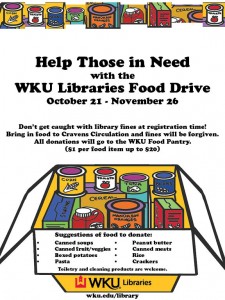 WKU Libraries Food Drive which is now underway will forgive library fines for up to $20. Students can bring in nonperishable food items, toiletries, or cleaning products to Cravens Circulation on Cravens Fourth Floor and will be forgiven $1 per item donated.  Items will be taken until Wednesday, November 26. For more information, contact Paula Bowles at 745-6167.

A Piece of the True Cross(roads) in Clarksdale, Mississippi

Perhaps no other place in America is as singularly linked to its music history as this small southern city on Highway 61 seventy-seven miles south of Memphis.  Here, since the early twentieth century, an astonishing number of significant musicians were born or lived from W. C. Handy, Son House, John Lee Hooker and Muddy Waters to Sam Cooke and Ike Turner while Influential blues artists like Charles Patton and Robert Johnson played in its juke joints, and some argue the first rock and roll song was written and rehearsed in 1951.

END_OF_DOCUMENT_TOKEN_TO_BE_REPLACED

Comments Off on A Piece of the True Cross(roads) in Clarksdale, Mississippi 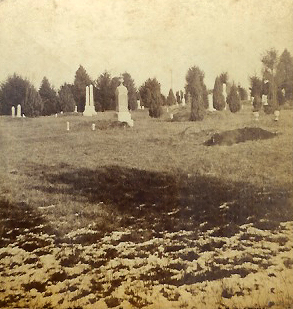 As Pioneer Cemetery filled up during the Civil War, the town of Bowling Green began looking for land on which to establish a new public burying ground.  One of the sites considered was WKU’s own hill (then known as Copley Knob) but the property, stripped of trees and littered with the debris of war, was deemed unsuitable.  (Perhaps the city fathers also took note of what might wash out of and down the hill during a heavy rain?)

Instead, in 1864 the town established Fairview Cemetery on 30 acres of land purchased from one William McNeal.  Formally dedicated in 1865, the cemetery has expanded to more than 100 acres and has become the final resting place for many notable citizens, including Mariah Moore (daughter of city founder Robert Moore), WKU’s first president Henry Hardin Cherry, and cake mix magnate Duncan Hines.

The Manuscripts & Folklife Archives section of WKU’s Special Collections Library recently received a donation of an early cash book for Fairview Cemetery.  Spanning the years 1871 through 1897, the well-worn book records transactions for lots and supplies, and for the manual labor required to maintain the cemetery — planting flowers, sodding and, of course, digging graves.  Alongside regular lot purchases appear payments from the sheriff for “paupers graves” as well as expenses for “reinterring,” reflecting the decision of some families to transfer their loved ones’ remains from Pioneer Cemetery and elsewhere.

Coincidentally, among some stereographic photo cards recently donated to the Special Collections Library are two 1880s images of the cemetery, showing a general view as well as the Confederate Monument, dedicated in 1876.  These photos and the cash book recall a time when Fairview Cemetery was only a few decades old, yet well on its way to becoming Bowling Green’s “city of the dead.”

Click here to access a finding aid for the Fairview Cemetery cash book.  For other collections relating to cemeteries, search TopSCHOLAR and KenCat. 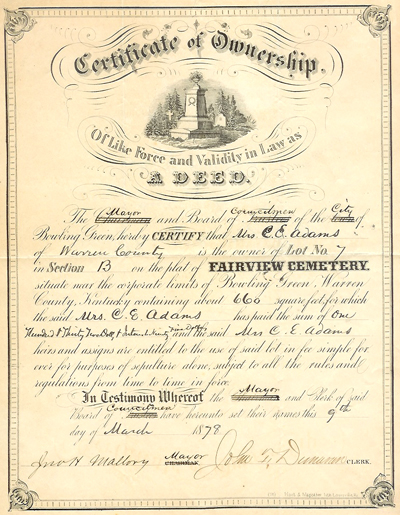 Comments Off on Fairview Cemetery