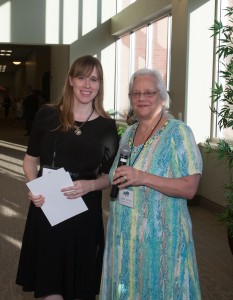 Southern Kentucky Book Fest partners announced Holly Goddard Jones as the winner of this year’s Kentucky Literary Award for her book The Next Time You See Me. First awarded in 2003 and reintroduced in 2012 after a brief hiatus, the Kentucky Literary Award is given to an author from Kentucky or one whose book has a strong Kentucky theme. Fiction and non-fiction books are recognized in alternating years.

Holly’s first book, Girl Trouble, was published in 2009 by Harper Perennial. The book was featured in O, The Oprah Magazine, People, New York Magazine, The Chicago Tribune, and elsewhere. It has been translated into Italian (Fazi Editore, 2010) and French (Albin Michele, 2013). The Next Time You See Me, Holly’s debut novel, was published in 2013 by Touchstone, an imprint of Simon & Schuster.

“Holly Goddard Jones’ debut novel is peopled with sensitively drawn, lonely characters we all recognize; the small Kentucky town they inhabit is so true to life that it feels like we have just driven down Main Street,” said Libby Davies, chair of the Kentucky Literary Award Selection Committee.

The award announcement was made at the Knicely Conference Center in Bowling Green at an authors’ reception on Friday, April 25–the night before the main Book Fest event. Jones was recognized with a commemorative certificate and a monetary gift.