A native of Alabama, William L. Sibert was born on October 12, 1860. Studying at the University of Alabama and the U. S. Military Academy at West Point, he graduated as one of the top cadets in his class in 1884. Prior to his work on the Panama Canal, Second Lt. Sibert was assigned to oversee improvements as the lock and dam system on the Green and Barren Rivers near Bowling Green, Kentucky was transferred from private ownership to the Federal government. In a letter currently housed in WKU’s Manuscripts Collection dated April 9, 1889, Sibert notified Mr. Morgan of Green Castle, Kentucky, that the United States was taking “possession of the fifteen acres of land at Lock No. 1 Barren River, for which it holds the deed.” Sibert’s next assignment was to construct a new lock in a lock-and-dam system which would enable ships to travel between Lake Superior and the lower Great Lakes.

On March 16, 1907, President Theodore Roosevelt appointed Major Sibert as a member of the Isthmian Canal Commission. As the head engineer of the Atlantic Division, Sibert was in charge of building the Gatun Locks and Gatun Dam. Gatum Dam is one and one-half miles long, built across two deep gorges which were formerly soft sea muddy beds of the Chagres River. Sibert knew that water pressure would exist under the floor of the upper flight of locks at Gatun and under the floor of the spillway channel below the dam. Thus, the Gatun Locks were built to resist upward water pressure induced by the huge lake which the dam created. 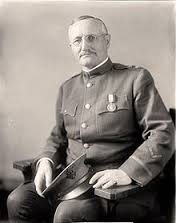 rt’s superiors expected his assignment to take two years longer than any other part of the Panama Canal construction. Determined to prove them wrong, Sibert had to pour concrete at a faster rate than had ever been done. He doubled the world’s maximum rate despite the fact that it was necessary to tow the required stone and sand from Porto Bello across an arm of the Carribean Sea to the job site. The Gatun Locks were operational on September 26, 1913, before Culebra Cut and the Pacific Locks at Miraflores and Pedro Miguel were finished. Sibert also built the wet breakwater, Colon Harbor, and excavated the channel from Gatun to the Atlantic Ocean. He was relieved from duty with the Canal when the commission was abolished on March 31, 1914.

At the outbreak of World War I, Sibert became the first commanding general of the First Infantry Division, known as “the Big Red One,” supervising their combat training and leading them to France in 1917. Soon thereafter, advancing to the rank of Major General, Sibert was named commander of the newly formed Chemical Warfare Service. For his war service, he received the Distinguished Service Medal and the French Legion of Honor.

In December 1918, Sibert accepted membership in Bowling Green’s XV Club, stating “This act makes me feel sure that when I come back to Bowling Green to live I will be among friends . . . . There is nothing that brings the same satisfaction in life as the good will of those whom you know and who know you.” When asked why he chose to retire to Bowling Green, he replied, “….in Bowling Green there are more men than anywhere else who will stop whatever they’re doing, no matter how busy they are, to go fishin’ or fox-huntin’ with me. (New York Times Magazine, Nov. 2, 1924) On the centennial of Sibert’s birth, a Bowling Green newspaper man wrote: “If the late Maj. Gen. William L. Sibert loved anything better than his slide rule and the thrill of getting big tough jobs done in jig time — perhaps it was his foxhounds and the stir the pack brought deep within him as it closed on quarry at full cry.” Sibert died at his country home near Bowling Green on October 16, 1935 and was buried in Arlington National Cemetery.