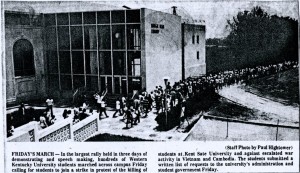 We were recently contacted by the May 4 Visitors Center at Kent State University to participate in the 45th anniversary of the Kent State shootings. According to the email WKU was one of 1250 universities and colleges that held protest demonstrations in the week that followed that Monday tragedy.  And indeed on Tuesday, May 6th WKU students joined the nationwide protest against the shootings and the escalation of the Vietnam War.   That protest began a two week sparring match between students and WKU administration.

May 11th – administrators meet with students regarding student demands; President Downing meets with Regents and staff at his home 6:00 pm

For more information check out these sources: