Before computer cataloging, newspaper clippings and other items regarding employees of the university were maintained in “vertical files.” Over time, these files grew to over six cubic feet.  These were stored in the closed stacks and not catalogued in KenCat because they were not considered part of the collections, but rather as a reference tool. These materials have now been integrated into UA1D files so researchers can find them using KenCat.  In some cases, this means a file exists for an employee who is still alive and is still employed by the university.  The personnel file materials will be added to these files and become available to researchers in the future once they meet the criteria, above.

Over thirty cubic feet of personnel files were processed.  Processing includes, but is not limited to, removing confidential health information, redacting social security numbers, and removing performance reviews- all of which are protected by federal law and state statute. 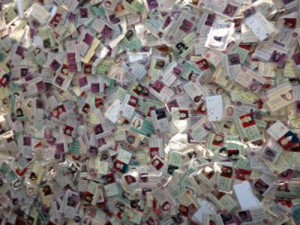 UA1D records in KenCat include a list of all containers, and a list of the folders (employee’s names) for each of those containers.  Now, those lists also include each employee’s employment dates and the name(s) of the employee’s department(s), if available.  A keyword search at KenCat.WKU.edu for “lastname, firstname” will generally yield results including the Personnel file record.  Nicknames are also included, where available, so “lastname, nickname” is also a useful search.

The main record for Personnel Files is available in KenCat.  For assistance, please feel welcome to contact WKU Archives or visit the Library Special Collections reference room in the Kentucky Building.