Over Here and Over There: World War I Songs 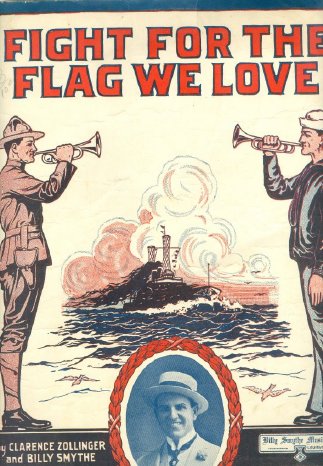 In The Piano in America, 1890-1940, Craig Roell states that by 1915 the majority of white middle-class urban families had pianos. With such a large market, it is not surprising that author Bernard Parker located over 9500 patriotic songs published in the United States between 1914 and 1920.
WKU Library Special Collections currently has a total of 4,438 pieces of sheet music. Our World War I holdings include titles that show the many facets of the war experience. Probably the best known hit patriotic song written for troop recruitment was George M. Cohan’s “Over There.” Louisville, Kentucky, musicians did their part with Clarence Zollinger and Billy Smythe’s rallying recruitment song, “Fight for the Flag We Love.”
Tucked among many love songs is the title “I Wish I had Someone to Say Goodbye To.” Children of soldiers are represented by “Don’t Leave Me Daddy,” “I Miss Daddy’s Goodnight Kiss,” and “Just a Baby’s Prayer at Twilight (For Her Daddy Over There).” Loved ones left stateside were admonished not to let their tears add to the soldiers’ hardship in “Keep the Home-Fires Burning (‘Till the Boys Come Home).”
Soldiers’ experiences vary from “Oh! How I Hate to Get Up in the Morning” to “When Yankee Doodle Learns to ‘Parlez Vous Francais’.” A lyric that also speaks to the world experience gained in France appears within “Johnny’s In Town:” “he’s been aroun’, He knows French and ev’rything, You should hear him when he goes ‘Ooo-la-la-la.’” A father’s concern about the Paris exposure is expressed in the well known “How Ya Gonna Keep ‘Em Down on the Farm.” 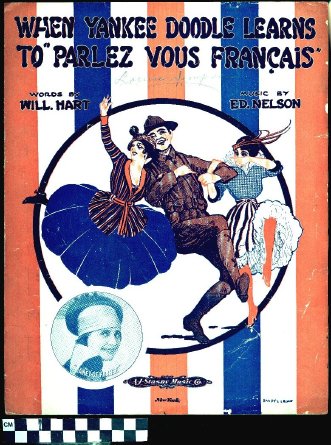 Popular WWI songs often spoke of the gaiety of Paris.

Due to the generosity of numerous donors, including Mary Clyde Huntsman, Drucilla Jones, and Bob and Carol Crowe Carraco, WKU is fortunate to have a good representation of the songs of World War I.

Comments Off on Over Here and Over There: World War I Songs